Biography
Dame Agatha Mary Clarissa Christie was a British crime writer of novels, short stories and plays. Best known for her 66 detective novels and more than 15 short stories, Christie had dysgraphia, and was unable to comprehend legible written work. As a result, she dictated all of her material to a typist.

Christie was born on September 15, 1890 in Devon, England. Growing up as a happy child, she later recalled being known as the “slow one” in the family. Writing and spelling were incredibly difficult, and she admitted to being an “extraordinarily bad speller” her entire life. Home schooled until she was eleven by her parents, things came to an abrupt end when her father died. Sent to receive formal education, she left in 1905 to attend finishing school in Paris. 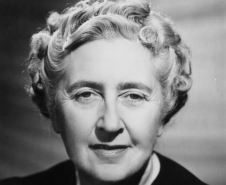 Returning to England in 1910, Christie and her mother lived periodically in Egypt, as Christie began writing short stories. After the outbreak of WW1 in 1914, Christie volunteered by aiding doctors and keeping up morale, while her fiancé, rose through the ranks to become a colonel in the Air Ministry. After the war ended, Christie decided to write her own detective novel, titled The Mysterious Affair at Styles, creating the detective Hercule Poirot. She wrote her second novel, The Secret Adversary in 1922, which earned her £50. She followed up with a third novel, once again involving Poirot, as well as a series of Poirot short stories for Sketch magazine.

After she and her husband divorced, Christie remarried, this time to archaeologist Max Mallowan in 1930. Frequently joining him on digs, she used the settings in her novels. Putting her writing aside once more during the second World War, Christie worked in a pharmacy in London, where she acquired a knowledge of poisons that she put to good use in her later crime novels.

Christie died on January 12, 1976 at the age of 85 at her house in Oxfordshire. During her time, she created several well-known characters including Hercule Poirot, who appeared in 33 of her novels and 54 short stories, Miss Marple, and Tommy and Tuppence – the detective couple. She is the world’s best-selling mystery writer, and is often referred to as the “Queen of Crime.” Her novels have sold roughly four billion copies, and her estate claims that her works rank third, after William Shakespeare and the Bible as the world’s most published books. Speaking of her disability, Christie once said, “I have learnt that I am me, that I can do the things that, as one might put it, me can do, but I cannot do the things that me would like to do.”
Get Started
Learn About Our Services
Find a Provider
View Profiles, Videos,
Maps & More
Recreation
Participate in Activities
for Children & Adults
Report Abuse
Report Incidents of
Abuse & Neglect
Government Websites by CivicPlus®
[]