Biography
Aimee Mullins is an American athlete, actress, and fashion model, best known for her perseverance after being born with a medical condition fibular hemimelia – which resulted in the amputation of both legs below the knee.

Born on July 20, 1976 in Allentown, Pennsylvania, Mullins was born with fibular hemimelia, meaning she was missing her fibula bones. As a result, she had both of her legs amputated below the knee when she was one year old. Told that she would never walk, and live using a wheelchair, Aimee faced the challenge by learning to walk by the age of two on prosthetic legs. 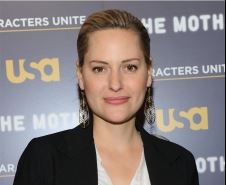 She would go on to spend her childhood doing other activities such as swimming, biking, softball, soccer, and skiing. While in high school, Mullins held the school record for stolen bases in softball. She was then chosen as one of three students in the U.S. to receive a full academic scholarship from the Department of Defense. At the age of 17, Aimee became the youngest person to hold a top-secret security clearance at the Pentagon, where she worked as an intelligence analyst during her summer breaks from Georgetown University.

While in college, Aimee made the 1996 Paralympic team for the Atlanta Games, where she ran in the 100m sprint and competed in the long jump. During this time she also became the first double-amputee sprinter to compete in NCAA track and field. Mullins was the first to wear the custom-made woven carbon-fiber prosthetics that were modeled after the hind legs of a cheetah, that are now the world standard in sports prosthetics.

Mullins became an international star, after she had a ten-page spread in the inaugural issue of Sports Illustrated for Women. Then, in 1999, she made her runway debut in London at the invitation of Alexander McQueen. Walking alongside the supermodels of the world in custom-carved wooden legs that were made to look like boots, Aimee captured the fashion world. She’s appeared in top fashion magazines like Vogue, Harper’s Bazaar, W, Glamour, and Elle. In 2011, she was named as the new Global Brand Ambassador of L’Oreal Paris.

Outside of fashion and sports, Aimee is a member of several non-profit organizations, most notably the Women’s Sports Foundation, which she later presided over as President from 2007 to 2009. Already at a young age, she has been immortalized in exhibits at institutions such as; the Smithsonian, the Modern Museum of Art, the NCAA Hall of Fame, the Victoria and Albert Museum, the Tate Modern, and the Women’s Museum where she is honored for her contribution to sport among the “Greatest American Women of the 20th Century.” At speaking engagements, Aimee has said frequently that, “The only true disability is a crushed spirit.”
Get Started
Learn About Our Services
Find a Provider
View Profiles, Videos,
Maps & More
Recreation
Participate in Activities
for Children & Adults
Report Abuse
Report Incidents of
Abuse & Neglect
Government Websites by CivicPlus®
[]