Biography
Alan Bartlett Shepard Jr. was an American naval aviator, NASA astronaut, and entrepreneur, who in 1961 became the second person, and the first American to travel into space. He later became the fifth man to walk on the Moon, and the only astronaut of the Mercury Seven to walk on the moon. They were his only two flights to space however, as he contracted Ménière’s disease, an inner-ear disease that can cause vertigo and deafness, as well as severe nausea and vomiting. 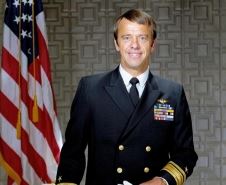 Born in Derry, New Hampshire on November 18, 1923, Shepard enrolled at the U.S. Naval Academy after finishing high school. He served on the destroyer USS Cogswell in the Pacific during World War II, and later received his Naval Aviator wings in 1947. In 1950, he attended the U.S. Naval Test School at Naval Air Station Patuxent River, Maryland. After graduating, he logged more than 8,000 hours flying time and 3,700 hours in jet aircraft.

In 1959, Shepard was one of 110 military test pilots invited by the newly formed National Aeronautics and Space Administration (NASA) to volunteer for the first US manned space flight program. Following a grueling series of tests, NASA selected him to be one of the original group of seven (including John Glenn and Gus Grissom) Mercury astronauts. On May 5, 1961, Spehard piloted the Freedom 7 mission and became the second person, and the first American to travel into space, spending 15 minutes in suborbital flight. Upon his return, he was celebrated as a national hero, honored with parades and received the NASA Distinguished Service Medal from President John F. Kennedy.

Diagnosed with Ménière’s disease in 1964, it caused him to be removed from flight status for most of the 1960s, as he suffered disorientation, dizziness, and nausea. Undergoing newly-developed experimental surgery in 1969, he was restored to full flight status in May. As the oldest astronaut in the program at age 47, Shepard made his second space flight as commander of Apollo 14 from January 31 - February 9, 1971. This was America’s third successful lunar landing mission, as Shepard piloted the most accurate landing of the entire Apollo program. It was the first mission to successfully broadcast in color from the surface of the Moon, and people around America watched as Shepard used his Wilson six-iron head attached to a lunar sample scoop handle, to drive golf balls.

Following Apollo 14, Shepard briefly served for the United Nations before becoming president of his own company, Seven Fourteen Enterprises. In 1994, he published a book called Moon Shot: The Inside Story of America’s Race to the Moon, which was later turned into a miniseries. Shepard died of leukemia on July 21, 1998.
Get Started
Learn About Our Services
Find a Provider
View Profiles, Videos,
Maps & More
Recreation
Participate in Activities
for Children & Adults
Report Abuse
Report Incidents of
Abuse & Neglect
Government Websites by CivicPlus®
[]