Biography
Albert Einstein, the German/American theoretical physicist who famously developed the theory of relativity lived at the high-functioning end of the autism spectrum, and was thought to have had Asperger syndrome.

Born at Ulm, Kingdom of Wütternberg in Germany, on March 14th 1879, Einstein gained his diploma in physics and mathematics in 1901 in Zurich, Switzerland. Just four years later in 1905 he obtained his doctorate degree. During this time he worked as a technical assistant at the Swiss Patent Office and produced much of his remarkable work. After several professor positions in Zurich, Prague, and Berlin, Einstein published his paper on the general theory of relativity in 1916. 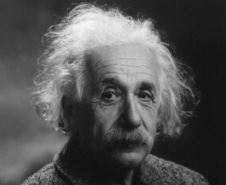 During this time he also contributed to the problems of the theory of radiation laying the foundation of the photon theory of light as well as improving the problems in statistical mechanics by developing the quantum theory of a monatomic gas; therefore making a connection with atomic transition probabilities. Einstein was awarded the Nobel Prize in Physics in 1921.

While in Berlin, Einstein became a German citizen which he then renounced in 1933 for political reasons and emigrated to America to take the position of Professor of Theoretical Physics at Princeton. He became a United States citizen in 1940 and retired from his post in 1945. After World War II, he collaborated with Dr. Chaim Weizmann in establishing the Hebrew University of Jerusalem.

Einstein didn’t speak the first three or four years of his life and incessantly repeated sentences, possible indicators for Asperger’s. His lack of social skills and preoccupation with complex subjects, math and science are also indicators. Einstein additionally had a lack of tact and social empathy which is commonly found in people with autism spectrum disorders. However, Asperger’s had yet to be properly diagnosed while Einstein was alive so there is no definitive answer as to whether or not the “absent-minded professor” lived with Asperger’s.
Stay Connected
Sign up to receive notifications
Directory
A listing of our staff and how to contact them.
Submit an Event
Have an event to submit for consideration?
Human Resources
Want to join our team? Find out how!
[]