Biography
Alfred Nobel was a Swedish chemist, engineer, and inventor of dynamite. Best known today as the creator of the Nobel prizes, he suffered from epileptic seizures as a child which later made him write about the agony of convulsions in a poem, You say I am a Riddle at the age of 18.

Born on October 21, 1833 in Stockholm, Sweden, Nobel was a sickly child, although always lively and curious. 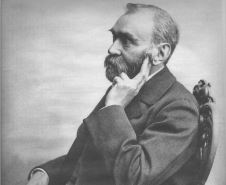 After his father became prosperous due to his invention of modern plywood and work on the torpedo, Nobel attended private tutors, excelling in chemistry and languages – fluent in English, French, German, Italian and Russian. As a young man, he studied in Paris before traveling to the United States at age 18 to study chemistry for four years. He filed his first patent for a gas meter in 1857.

After returning home, Nobel turned his attention to the study of explosives, inventing a detonator in 1863 and the blasting cap in 1865. After the death of his younger brother in a factory explosion, Nobel went on to improve the stability of the explosives, later inventing dynamite in 1867. He was elected as a member of the Royal Swedish Academy of Sciences in 1884, by the institution which would later select laureates for two of the Nobel prizes.

During his lifetime, Nobel issued 350 patents internationally and by his death, had established 90 armament factories. In 1891, Nobel moved from Paris to San Remo, Italy, dying of a cerebral hemorrhage in 1896. After his death, it was revealed that Nobel had left most of his wealth in a trust, in order to fund the awards that would become known as the Nobel Prizes. These five prizes, awarded for distinction in physical science, chemistry, medical science, literary work, and peace, were Nobel’s way of leaving a greater legacy behind after he became known as “the merchant of death” for his invention of dynamite.
Get Started
Learn About Our Services
Find a Provider
View Profiles, Videos,
Maps & More
Recreation
Participate in Activities
for Children & Adults
Report Abuse
Report Incidents of
Abuse & Neglect
Government Websites by CivicPlus®
[]