Biography
Alicia Alonso Martinez is the Cuban prima ballerina assoluta and choreographer. She is most famous for her portrayals of Giselle and the ballet version of Carmen. From the age of nineteen, Alicia was afflicted with an eye disorder that left her partially blind.

Alonso was born in Havana, Cuba on December 21, 1921. She started dancing at the age of seven and by the age of eight, she studied ballet at Sociedad Pro-Arte Musical in Havana. 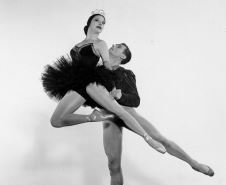 A year later, she performed publicly for the first time in Tcaikovsky’s Sleeping Beauty. In 1937, her rapid rise in ballet came to a halt as she fell in love with fellow ballet student, Fernando Alonso, whom she married. The couple moved to New York City to start professional careers, but she soon gave birth to a daughter. However, Alicia managed to continue her training, taking private lessons before traveling to London to continue her studies.

Things took a turn for the worse in 1941 when Alonso was diagnosed with a detached retina. She had surgery to correct the problem, and was ordered to lie in bed motionless for three months to allow her eyes to heal. Unable to comply, she practiced with her feet, pointing and stretching. The operation was not completely successful, and a second surgery was performed. It however did not go well, and it was determined that Alonso would never have peripheral vision. Back in Havana, she had a third surgery, and was ordered not to move for a year. She was not allowed to play with her daughter, chew food too hard, laugh or cry, or move her head. Her husband sat with her every day and used his fingers to teach her the classical ballet moves. Finally allowed to move, Alonso was injured when a hurricane shattered a door in her home, spraying glass splinters onto her head and face. Amazingly, her eyes were not injured, and she was cleared to begin dancing.

Back in New York in 1943, Alonso began rebuilding her skills when she was asked to dance Giselle to replace the theatre’s injured prima ballerina. Upon her first performance, she was promoted to principal dancer, dancing the role of Giselle until 1948. To conceal her handicap of partial sight in one eye, and no peripheral vision, Alonso trained her partners to be exactly where she needed them without exception. She also had the set designers install strong spotlights in different colors to serve as guides.

Returning to Cuba in 1948, Alicia and Fernando formed their own company, which they maintained with little financial support. During this time she also danced in Russia twice and performed for the Paris Opera Ballet in 1953. During the decades to follow, she had cross-world tours through West and East European countries, Asia, North and South America, as well as guest starring with other companies. She danced well into her 70s, and continues to direct her ballet company despite being 91 and almost blind.
Get Started
Learn About Our Services
Find a Provider
View Profiles, Videos,
Maps & More
Recreation
Participate in Activities
for Children & Adults
Report Abuse
Report Incidents of
Abuse & Neglect
Government Websites by CivicPlus®
[]