Biography
Andre Bocelli is an Italian tenor, singer-songwriter, and multi-instrumentalist. Born with poor eyesight, he became blind at the age of twelve following a soccer accident.

Born on September 22, 1958 in Lajatico, Italy, Bocelli was diagnosed with congenital glaucoma, and visually impaired. Turning to music for comfort, he showed a passion for it early in life. At the age of six, he started piano lessons and later learned to play the flute, saxophone, trumpet, trombone, guitar and drums. 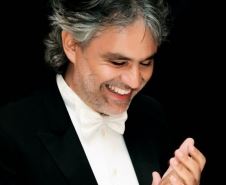 In 1970, at the age of twelve, he lost his eyesight completely after he was accidentally hit on the head during a soccer match and suffered a brain hemorrhage. Doctors resorted to leeches in an attempt to save his sight, but it was unsuccessful, and he remained blind. Two years later at the age of fourteen, Bocelli won his first song competition with “O sole mio.”

Bocelli later studied law at the University of Pisa. He spent a year working as a lawyer, before deciding to try a singing career, financing himself by playing piano in bars. His lucky break, however, didn’t come until 1992 when he was in his thirties. Bocelli recorded a demo tape of a duet that was heard by famed Italian tenor Luciano Pavarotti, who was then persuaded to record the song with him. The duo scored a Europe-wide smash hit while international success followed with the single “Time To Say Goodbye” in 1996, recorded with Sarah Brightman.

Notable albums include Romanza (1997), Sueno (1999), Tosca (2003), Cieli di Toscana (2001), Amore (2006), and Incanto (2008). Outside of music, Bocelli is the author and coauthor of numerous works available in Italian, English, and other languages. Some books are also available in Braille. He has sold over 80 million albums worldwide, making him the biggest selling singer in the history of Classical music. His duet with Celine Dion “The Prayer” for the film The Quest for Camelot won the Golden Globe for Best Original Song and was nominated for an Academy Award in 1999. Speaking of his hard work to get where he is today, Bocelli has said, “Destiny has a lot to do with it, but so do you. You have to persevere, you have to insist.”
Stay Connected
Sign up to receive notifications
Directory
A listing of our staff and how to contact them.
Submit an Event
Have an event to submit for consideration?
Human Resources
Want to join our team? Find out how!
[]