Biography
Bethany Meilani Hamilton is an American professional surfer, who is most famous for surviving a shark attack that took her left arm at the age of 13.

Born on February 8, 1990 in Lihue, Hawaii, Hamilton was a natural born surfer. By the age of eight, she entered her first surf competition where she won both the short and long board divisions. Surfing daily, Bethany was attacked by a 14-foot tiger shark while surfing off Kauai’s North Shore on October 31, 2003. 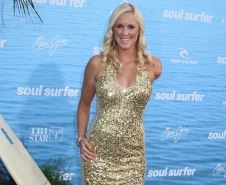 The attack left her with a severed left arm just below the shoulder. Losing over 60 percent of her blood and making it though several surgeries without infection, Bethany began her road to recovery with an unbelievably positive attitude.

Just one month after the attack, Bethany returned to the water to continue pursuing her goal of becoming a professional surfer. Initially, she adopted a custom-made board that was longer and slightly thicker, with a handle for her right arm to make it easier for paddling. After teaching herself to surf with one arm, she made her return to surf competition, placing fifth in the Open Women’s division of that contest in January of 2004. That year, she won the ESPY Award for Best Comeback Athlete. With no intention of stopping, Bethany continued to enter and excel in competition. Just over a year after the attack, she took first place in the Explorer Women’s division of the 2005 NSSA National Championships – it was also her first National Title.

By 2007, Bethany realized her dream and turned pro. Competing in numerous ASP and World Tour Events, she placed second at the 2009 World Junior Championship. Outside of surfing, Bethany wrote her autobiography, Soul Surfer, in 2004, which was later turned into a movie in 2011. Since then, she’s written eight more books. Focused on bringing hope to others Bethany uses her life experiences to motivate and inspire saying, “I've learned life is a lot like surfing. When you get caught in the impact zone, you need to get right back up, because you never know what's over the next wave... and if you have faith, anything is possible, anything at all.”
Get Started
Learn About Our Services
Find a Provider
View Profiles, Videos,
Maps & More
Recreation
Participate in Activities
for Children & Adults
Report Abuse
Report Incidents of
Abuse & Neglect
Government Websites by CivicPlus®
[]