Bruce Jenner, better known as the decathlon gold medalist at the 1976 Olympics in Montreal, was diagnosed with dyslexia as a child.

Born in Mount Kisco, New York on October 28, 1949, Jenner had a “torturous” time in school from Kindergarten through 6th grade. Mislabeled by his teachers as lazy, Jenner had low self-esteem and feared school. After being tested for glasses, and finding he had perfect 20/20 vision, a school doctor recognized his dyslexia. 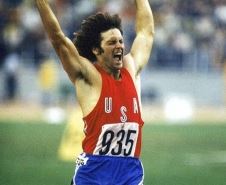 Although the diagnosis solved the answer to his learning problems, Jenner only became happy once he started to participate in sports. He earned a football scholarship and attended Graceland College in Iowa, but a knee injury forced him to end his football career early, and he switched to the decathlon.

After placing tenth in the 1972 Munich games, he devoted himself to an intense training regimen, while selling insurance outside training hours. Jenner spent eight hours a day at the San Jose City College track, becoming the 1974 and 1976 American champion. At the 1976 Olympics in Montreal, he won the gold medal, setting the world record of 8,616 points. His score was later reevaluated against a new table, giving him 8,634 points, making him the #9 American. He was the 1976 recipient of the James E. Sullivan Award as the top amateur athlete, as well as the Associated Press Male Athlete of the Year. Ten years later he was inducted into the Olympic Hall of Fame.

Today, Jenner enjoys much success from his various enterprises. He’s had success with sports commentating, acting in television, and working as a television personality. Jenner is also active in dyslexia foundations, lending his voice to Demystifying Dyslexia. In the end, he thanks his dyslexia for teaching him the power of hard work, saying, “If I wasn’t dyslexic, I probably wouldn’t have won the Games. If I had been a better reader, then that would have come easily, sports would have come easily…and I never would have realized that the way you get ahead in life is hard work.”
Get Started
Learn About Our Services
Find a Provider
View Profiles, Videos,
Maps & More
Recreation
Participate in Activities
for Children & Adults
Report Abuse
Report Incidents of
Abuse & Neglect
Government Websites by CivicPlus®
[]