Biography
Charles John Huffam Dickens is considered the greatest novelist of the Victorian period. During his life, his works saw unprecedented fame, including classics such as A Christmas Carol and Oliver Twist. Suffering from epilepsy, Dickens wrote many of his characters with the disorder; with such medical accuracy that doctors who read him today are amazed. To this day, his novels and short stories continue to be widely popular around the world. 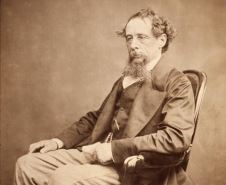 Born on February 7, 1812, in Portsmouth, England, Dickens had little formal education as he left school to work in a factory after his father was thrown into debtors’ prison in 1824. The new living conditions Dickens experienced later became inspiration for his works. After a few months, his father’s grandmother died, leaving a sum of £450, getting the family out of debt. However, all of Dickens’ experiences during this time helped him write his favorite and most autobiographical novel, David Copperfield.

In his 20s, Dickens was carefree and energetic, writing as a political journalist, creating his first pieces, Sketches by Boz. Moving through different jobs, Dickens wrote Oliver Twist which was published in 1838. His successes started piling up, and he traveled to America for the first time in 1842. Soon after his return, he wrote A Christmas Carol in 1843, followed by The Chimes and The Cricket on the Hearth. All while writing, Dickens was very involved in philanthropy. In 1852, Dickens initiated public readings to raise money for Great Ormond Street Hospital, helping it out of financial ruin. Two of his biggest works, A Tale of Two Cities and Great Expectations were later published in 1859 and 1861. Late in life, Dickens suffered two strokes, the second one on June 8 1870, causing his death the following day. He’s laid to rest in the Poets’ Corner of Westminster Abbey.

Despite his lack of formal education, over his career, he edited a weekly journal for 20 years, wrote 15 novels, 5 novellas and hundreds of short stories and non-fiction articles. He also lectured and campaigned extensively for children’s rights, education, and other social reforms. Dickens suffered from epilepsy as a child, but outgrew it as an adult. He chronicled it through various characters in his books. These characters include Bradley Headstone (Our Mutual Friend) and Edward Leeford (Oliver Twist) and others.
Get Started
Learn About Our Services
Find a Provider
View Profiles, Videos,
Maps & More
Recreation
Participate in Activities
for Children & Adults
Report Abuse
Report Incidents of
Abuse & Neglect
Government Websites by CivicPlus®
[]