Biography
Charles Schwab is the founder of the Charles Schwab Corporation. The famous slogan, “Talk to Chuck,” was created out of necessity as Schwab has dyslexia, and for a long time was unable to read properly.

Born July 29, 1937 in Sacramento, California, Schwab attended high school in Santa Barbara and was the captain of the golf team. Unknowingly living with dyslexia until the age of 40, Schwab excelled in math, but found English and reading difficult, especially when taking notes. 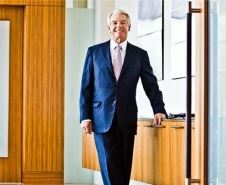 Despite his problems, he went on to graduate from Stanford University in 1959 with a Bachelor’s degree in Economics with the help of his friends, who took notes for him in class. In the first two years at school, Schwab says he struggled with the vast course load, flunking English twice and failing at foreign language. In 1961, Schwab graduated from Stanford Graduate School of Business with an MBA.

After graduation, Charles “Chuck” Schwab and two other partners launched an investment newsletter, Investment Indicator, in 1963. At its height, the newsletter had 3,000 subscribers, each paying $84 a year to subscribe. After a series of business changes, Investment Indicator became a part of Commander Industries, before being changed to Charles Schwab & Co. Inc in 1973. In just six years, Schwab had 84,000 clients. When it became a member of the NYSE in 1981, the client numbers almost tripled, jumping to 222,000. Today, the company serves 8.2 million client brokerage accounts from over 300 offices. Preferring oral communication to written word, Schwab helped the marketing department launch the campaign, “Talk to Chuck,” rather than write to him.

Today, Charles enjoys retirement, after he and his wife transferred Schwab Learning and sparktop.org to other organizations, so the foundation can concentrate on making grants to nonprofit organizations. Ranked 91 on Forbes’ richest person in the United States list in 2012, Schwab credits his dyslexia for helping visualize concepts differently, helping him get to the conclusion faster than most people.
Get Started
Learn About Our Services
Find a Provider
View Profiles, Videos,
Maps & More
Recreation
Participate in Activities
for Children & Adults
Report Abuse
Report Incidents of
Abuse & Neglect
Government Websites by CivicPlus®
[]