Biography
Oscar-Claude Monet was the French founder of the Impressionism movement. Famous for his London Parliament series and his Water Lilies, Monet was diagnosed with nuclear cataracts that left him nearly blind by the end of his life, during which he painted his most known work, the Water Lilies series. 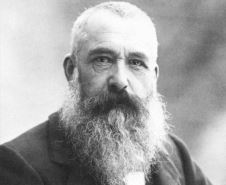 Moving to the Normandy coastal town of Le Havre in 1845 with his family, Claude entered the Le Havre secondary school of the arts in 1851. Locals knew him well for his charcoal caricatures which he would sell for ten to twenty francs. Just six years later, in 1857, Monet left the school after his mother died.

Moving back to Paris, Monet began painting the outdoors when he joined the First Regiment of African Light Cavalry in 1861. The tour was a seven-year commitment in Algeria, but two years in, Monet contracted typhoid fever and was released on the condition that he agree to complete an art course at an art school. Becoming a student of Charles Gleyre in Paris, he then met Pierre-Auguste Renoir, Frédéric Bazille, and Alfred Sisley. Together, they began painting in a new approach of painting the effects of light “en plein air” creating what is now known as Impressionism.

Gaining recognition for his painting of his future wife, Camille, The Woman in the Green Dress in 1866, Monet used her in several other paintings. After the outbreak of the Franco-Prussian War in 1870, Monet took refuge in England before moving to the Netherlands in 1871. Returning to Paris in late 1871, Monet painted one of his most known pieces, Impression, Sunrise in 1872. After Camille’s death in 1879, Monet began painting landscapes and seascapes to document the French countryside.

In the 1880s and 1890s, Monet became increasingly successful selling his paintings, to the point that he was able to buy a house, the surrounding buildings, and the land for his gardens at Giverny. From there, until his death, Monet began working on “series” paintings, depicting one subject in varying light and weather conditions. Such works are Haystacks, Rouen Cathedral, Poplars, The Houses of Parliament, Mornings on the Seine, and the Water Lilies which were painted from his own garden.

While painting the various series, Monet began battling cataracts in 1907, which was a persistent problem until he consented to two surgeries in 1923 after becoming almost completely blind. Mostly color blind, Monet saw things in mostly reddish tone, and after surgery was able to see certain colors better, which can be seen in the bluer water in the lilies paintings. Painting until his death, Monet died on February 5, 1926 at Giverny from lung cancer.
Get Started
Learn About Our Services
Find a Provider
View Profiles, Videos,
Maps & More
Recreation
Participate in Activities
for Children & Adults
Report Abuse
Report Incidents of
Abuse & Neglect
Government Websites by CivicPlus®
[]