Biography
Dan Edward Aykroyd is a Canadian comedian, singer, actor, and screenwriter. He was an original cast member of Saturday Night Live, an originator of The Blues Brothers, and Ghostbusters.  Aykroyd has found major success despite being diagnosed with Tourette’s and Asperger syndrome at an early age.

Born on July 1, 1952 in Ottawa, Ontario, Canada, Aykroyd was born with webbed toes, which was revealed in the movie, Mr. Mike’s Mondo Video. 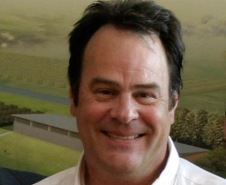 He was also born with heterochromia – his right eye is green and his left eye is brown. In the early 1960s, as a child, Aykroyd was diagnosed with Tourette’s and Asperger’s although he mostly grew out of it by fourteen with the help of therapy. In high school, Aykroyd began performing comedy and music, going on to attend Carleton University for a short time. He eventually dropped out and moved to Toronto, where he became a member of the Second City improvisational troupe in 1973. While with Second City, he had the chance to work with other upcoming comedians like John Candy, Bill Murray, and Gilda Radner.

During this time, he also worked with John Belushi creating a musical act called “the Blues Brothers,” which first appeared on SNL. He played Elwood Blues, a harmonica-playing sidekick to his front-man brother, Jake. The duo toured together in 1978, releasing three albums, later starring in the comedy film The Blues Brothers in 1980. The duo made two more films, 1941 and Neighbors before Belushi’s death in 1982.

Aykroyd left SNL in 1979, going on to enjoy success as an actor and screenwriter. He co-starred with Eddie Murphy in Trading Places in 1983, before acting and co-writing the blockbuster hit, Ghostbusters in 1984. Also starring Bill Murray and Harold Ramis, the trio reprised their roles in the sequel in 1989. Aykroyd also worked with fellow SNL alum, Chevy Chase in 1985’s Spies Like Us. In 1989, Aykroyd showed his serious side, playing Boolie Werthan in Driving Miss Daisy, receiving an Academy Award nomination for his role.