Biography
David Robert Joseph Beckham is one of the most celebrated English football (soccer) players of his generation. He has played for Manchester United, Preston North End, Real Madrid, Milan, and Los Angeles Galaxy, as well as the England national team. Movies have been written about his corner kick (Bend It Like Beckham) and children around the globe look up to him, but most are not aware that David has Tourette’s Syndrome manifested through OCD. 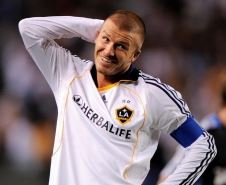 David was born in Leytonstone, London, England on May 2, 1975. He regularly played football as a child, telling teachers he wanted to become a footballer when he grew up. Beckham inherited his parents’ love for Manchester United, even becoming a mascot for a match against West Ham United in 1986. During a two year period where he played for a youth team, he was named Under-15 Player of the Year in 1990, subsequently signing a contract on July 8, 1991 at age 14.

Beginning his club career, Beckham was part of the group to win the FA Youth Cup on May 1992, as he scored in the final against Crystal Palace. On December 7, 1994, Beckham made his UEFA Champions League debut, scoring a goal in a 4-0 victory before being loaned to Preston North End for a season. He soon returned though and made his Premier League debut for Man U on April 2, 1995. His big break however, came in the 1996-97 season after he scored a goal from the halfway line, which was later voted No. 18 in the list of 100 Greatest Sporting Moments in 2002.

Throughout his success on the football pitch, his need to have everything in constant perfection has shaped his private life. Telling reporters that he’s spent hours straightening furniture, buying exactly 20 packs of noodles each visit at the supermarket, and wearing a new pair of football boots for every match, David says he’s tried to get rid of the condition himself, but says he’s not worried about it. “I’ve accepted it. I’m just very obsessive with certain things.”
Get Started
Learn About Our Services
Find a Provider
View Profiles, Videos,
Maps & More
Recreation
Participate in Activities
for Children & Adults
Report Abuse
Report Incidents of
Abuse & Neglect
Government Websites by CivicPlus®
[]