Biography
Daryl Christine Hannah is an American film actress. Best known for her performances in Splash, Blade Runner, and Steel Magnolias, Daryl is also one of the few Hollywood stars to speak openly about having Asperger’s Syndrome.

Born in Chicago, Illinois on December 3, 1960, Hannah was diagnosed as being borderline autistic as a child. Shy and reserved due to Asperger’s, Hannah became interested in movies at a young age and joined the soccer team in high school before enrolling at USC. 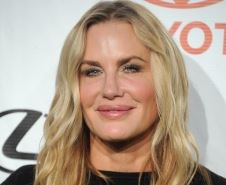 Making her film debut in 1978, she turned down many roles early in her career. Her first notable role came in 1982 in Blade Runner. That same year she performed in the summer hit Summer Lovers, before being cast in her break-out film, Splash. Co-starring with Tom Hanks, the film was a major success, and it established her as a high-profile film actress. Her success continued throughout the 80s, which included Wall Street, Roxanne, Cyrano de Bergerac, Crimes and Misdemeanors, and Steel Magnolias.

With success came popularity, which frightened Hannah, as she frequently refused to return calls or participate in promotional work. Later discussing how Asperger’s got her blacklisted from Hollywood, Hannah said, “I never went on talk shows, never went to premieres. Going to the Academy Awards was so painful for me. I’d almost faint just walking down the red carpet. I was so socially awkward and uncomfortable that I eventually got blacklisted.” She would later make her return in Quentin Tarantino’s Kill Bill in 2003.

Outside of acting, Hannah is an active environmentalist. Living, in her own words, “off the grid” on a ranch in the Rocky Mountains, she raises livestock, snowboards, rides horses, and scuba-dives. She runs her own website, and is also very involved in several charities.
Get Started
Learn About Our Services
Find a Provider
View Profiles, Videos,
Maps & More
Recreation
Participate in Activities
for Children & Adults
Report Abuse
Report Incidents of
Abuse & Neglect
Government Websites by CivicPlus®
[]