Biography
Erin Brockovich-Ellis is an American legal clerk and environmental activist who was most famously portrayed by Julia Roberts in the film that shares her story and name. Despite the lack of formal law school education, or any legal education, Brockovich was instrumental in winning a $333 million class-action lawsuit, the largest of its kind in U.S. history. However, growing up, she was told she would never make it through college, as she was diagnosed with dyslexia. 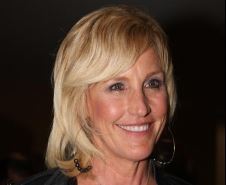 Erin was born June 22, 1960 in Lawrence, Kansas. Growing up dyslexic, she was teased by her peers and negatively labeled by her teachers. Though her high school counselors told her she wouldn’t make it through college, Brockovich went on to graduate from Wades Business College with an Associates of Applied Arts degree. She then worked as a management trainee for Kmart in 1981 but quit after a few months, entering a beauty pageant. After winning Miss Pacific Coast in 1981, she gave up pageant life and moved to California where she has lived ever since.

Once living in Hinkley, California, she began her new job as a legal clerk. Living in the area, she noticed a large amount of neighbors and friends suffering from cancer and set off to uncover the truth. Channeling her dyslexia into acute memorization, she collected thousands of pages of medical records and legal briefs, learning about the history of the town. Although she didn’t have any legal education, she launched a case against Pacific Gas and Electric to prevent further pollution of the town’s water with the chemical, hexavalent chromium. The case made history as the largest settlement ever paid at $333 million. During this time she made a name for herself as a litigator and worked on several other successful cases. When asked how her disability affected her, Brockovich said, “Life is full of challenges whether you are learning disabled or not. How you handle these challenges is what builds character. Never be afraid to be who you are.”

The story took Hollywood by storm as it was released on the big screen in 2000 with Julia Roberts playing Brockovich. Julia won the Academy Award for Best Actress for her portrayal while Brockovich had a cameo role as a waitress named Julia R. Today, Brockovich is the President of Brockovich Research & Consulting.
Get Started
Learn About Our Services
Find a Provider
View Profiles, Videos,
Maps & More
Recreation
Participate in Activities
for Children & Adults
Report Abuse
Report Incidents of
Abuse & Neglect
Government Websites by CivicPlus®
[]