Biography
F.D. Roosevelt was the 32nd President of the United States, serving from 1933 to 1945, the only President elected for more than two terms of office. At the age of 39, while vacationing with family at Campobello Island, New Brunswick, Roosevelt contracted an illness, at the time believed to be polio, which resulted in his total and permanent paralysis from the waist down. 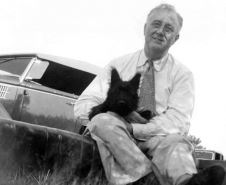 Roosevelt was born January 30, 1882, in Hyde Park, New York. He attended Harvard College and was the editor-in-chief of The Harvard Crimson daily newspaper. He graduated in 1903 and went on to Columbia Law School in 1904, but dropped out in 1907 after passing the New York State Bar exam, going on to practice corporate law.

After contracting polio in August of 1921, Roosevelt refused to accept his paralysis and went on to try a wide range of therapies, including hydrotherapy; this lead to his purchase of a resort in Warm Springs, Georgia in 1926 which still operates as the Roosevelt Warm Springs Institute for Rehabilitation. After becoming President, he helped found the National Foundation for Infantile Paralysis, now known as the March of Dimes.

Only two photographs are known to exist of FDR while he was in his wheelchair and only four seconds of film of the “walk” he achieved, which consisted of swiveling his torso while supporting himself with a cane with iron braces on his hips and legs. After the paralysis, he went on to become the Governor of New York from 1929-1932, and then the President from 1933-1945. During his Presidency, Roosevelt navigated the United States through the Great Depression and World War II. Prominent achievements created during his Presidency consist of the Securities and Exchange Commission, the repeal of prohibition, the Social Security Act, the Fair Labor Standards Act which created the minimum wage, and the Wagner Act which is now known as the National Labor Relations Act, which allowed workers to organize unions and engage in collective bargaining.

He’s most famously known for his inauguration speech on March 4, 1933 where he stated, “The only thing we have to fear is fear itself.” Roosevelt died on April 12, 1945 after suffering a stroke while in Georgia.
Get Started
Learn About Our Services
Find a Provider
View Profiles, Videos,
Maps & More
Recreation
Participate in Activities
for Children & Adults
Report Abuse
Report Incidents of
Abuse & Neglect
Government Websites by CivicPlus®
[]