Biography
Frida Kahlo was the first Mexican artist of the 20th century whose work was purchased by an international museum who was most famously known for her self-portraits. Contracting polio at the age of six, it left Kahlo’s right leg thinner than the left, which she disguised by wearing long colorful skirts. It has also been said that she suffered from spina bifida, a congenital disease that could have affected both spinal and leg development. 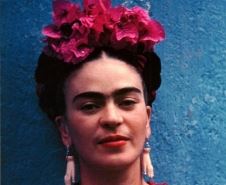 Kahlo was born July 6, 1907 in Coyoacán, Mexico in her home known as the Blue House. Although contracting polio at a young age, she went on to participate in boxing and other sports. In 1922, she was enrolled in the Preparatoria, one of Mexico’s premier schools becoming one of just thirty-five girls. On September 17, 1925, Kahlo was riding in a bus that collided with a trolley car, suffering serious injuries, including; a broken spinal column, a broken collarbone, broken ribs, a broken pelvis, eleven fractures in her right leg, a crushed and dislocated right foot, and a dislocated shoulder. An iron handrail pierced her lower abdomen, preventing her from ever giving birth.

As a result of the accident, she had as many as thirty-five operations, mainly on her back, right leg, and her right foot. Kahlo spent three months recovering in a full body cast, and had relapses of extreme pain for the remainder of her life. After the accident, she abandoned studying medicine and began her painting career. Of her 143 paintings, 55 are self-portraits, which she said she painted because, “I am so often alone and because I am the subject I know best.” Her mother had a special easel made for her so she could paint in bed, while her father lent her his box of oil paints and brushes. She died at the age of 47 on July 13, 1954 at her home after a year of health issues, including the amputation of her right leg due to gangrene.

Aside from the 1939 purchase by the Louvre, Kahlo’s work was not widely acclaimed until the early 1980s, when the Mexico artistic style called Neomexicanismo began. Also during this time her work began to surface outside of Mexico and Hayden Herrera published her biography Frida: The Biography of Frida Kahlo, which became a worldwide bestseller as well as a hit movie in 2002. Today, tourists and art lovers flock to her home, Casa Azul in Mexico City which was turned into a museum housing artifacts of her life.
Get Started
Learn About Our Services
Find a Provider
View Profiles, Videos,
Maps & More
Recreation
Participate in Activities
for Children & Adults
Report Abuse
Report Incidents of
Abuse & Neglect
Government Websites by CivicPlus®
[]