Biography
Fyodor Mikhailovich Dostoyevsky was a Russian novelist, best known for his novels Crime and Punishment, and The Brothers Karamazov. Dostoyevsky had a rare form of temporal lobe epilepsy, which he kept track of during his last two decades.

Dostoyevsky was born on October 30, 1821 in Moscow, Russia. At the age of three, Fyodor was introduced to heroic sagas, fairy tales and legends, all influenced by his nannies. His mother taught him to read and write, using the Bible, when he was just four. As an adolescent, he studied at a private boarding school in Moscow with his older brother Mikhail, before the two were separated, each joining Military Academies. Completing his studies in 1843, finishing in the top three of engineers in his class, Fyodor decided he preferred a career in writing. In 1846 he published his first work, Poor Folk. 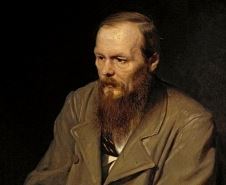 Associating himself with radicals for a short time, Fyodor was arrested in 1849 and sentenced to death. He was placed in solitary confinement for eight months. His sentence was changed by Tsar Nikolai I at the last minute, however, after he experienced a mock execution. He was then sentenced to four years hard labor in a Siberian prison and four years compulsory military service. These experiences shaped his future novels, and changed him into a highly spiritual man.

Along with his brother, Mikhail, Fyodor started two magazines. After Mikhail’s death in 1864, Fyodor tried to gamble his way out of debt, but found himself with a deal to produce a new novel by November 1, 1866 – or all of his rights to past and future works would revert to his bookseller. He delivered The Gambler on November 1st, before releasing Crime and Punishment. He got married for the second time to his stenographer Anna Grigorievna in 1867. This marriage gave him emotional stability as she nursed him through depression and epilepsy – in which he suffered at least 102 seizures in the final two decades of his life. During this time he wrote some of his greatest works; The Idiot (1868), Demons (1871-1872), and The Brothers Karamazov (1880). In some of these novels he used his epileptic experiences to create characters with epilepsy. His health began to deteriorate, and in March 1877 he had four epileptic seizures. This didn’t keep him from traveling and working, as he finished the 796 page Karamazov the year before he died.

Dostoyevsky died on January 26, 1881 from complications due to his epilepsy. It is estimated that 40,000 to 100,000 mourners attended his funeral. His tombstone is inscribed with a Bible verse that prefaces The Brothers Karamazov, “Verily, verily, I say unto you, except a corn of wheat fall into the ground and die, it abideth alone: but if I die, it bringeth forth much fruit.”
Get Started
Learn About Our Services
Find a Provider
View Profiles, Videos,
Maps & More
Recreation
Participate in Activities
for Children & Adults
Report Abuse
Report Incidents of
Abuse & Neglect
Government Websites by CivicPlus®
[]