Biography
Gerry Bertier was a prominent Virginia high school American football player, best known for his participation on the 1971 Virginia State Champion T.C. Williams High School team and their portrayal in the Disney film Remember the Titans. After the conclusion of the 1971 season, Bertier was involved in an automobile accident that left him paralyzed from the waist down. Despite the injury, he remained an active athlete, participating in the Paralympics, winning multiple medals. 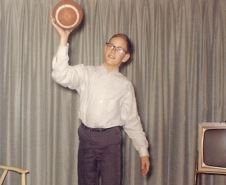 Born August 20, 1953, Bertier was raised by his mother and grew up to be an amiable, goal-oriented individual. Frequently discussing his lifetime goal of winning an Olympic gold medal, Bertier was an active participant in various athletics, specifically football and track. During the 1971 football season, he had 142 tackles and 42 sacks in the 13-0 season, which included nine shut outs. Bertier was named team Defensive Most Valuable Player, as well as the National Prep School Football Player of the Year and received First Team All-Region, All-State, and All-American honors.

On December 11, 1971, after attending a banquet honoring the players for their undefeated season, Bertier lost control of his car, a result from mechanical failure, and crashed into a pram. After initially stabilizing him, the doctors determined that his lungs had been pierced by his sternum which went into his spinal column. Although it took him time to adjust to the paralysis, he went on to become unstoppable, telling his mother, “I don’t care if I’m paralyzed. God left me with my brain and I’m going to use it to help people less fortunate.”

Gerry went on to spend ten years after his accident dedicated to helping make the life for others with disabilities easier. He coordinated a “Walk for Mankind,” and gave speeches across the country for rights for the handicapped. At his suggestion, the Alexandria Junior Chamber of Commerce started a “Ban the Barriers” project aimed at convincing store owners to eliminate architectural obstacles to wheelchairs. Due to his great capacity to motivate, Gerry was presented with the “President’s Award.” Competing in the Paralympics, Gerry did win his gold medal, both in discus and shot put. His new life’s mission was cut short on March 20, 1981 when his van was struck by a drunk driver. Bertier was 27. Today his legacy continues on through the Gerry Bertier #42 Foundation which supports spinal cord injury research at Virginia Commonwealth University.
Stay Connected
Sign up to receive notifications
Directory
A listing of our staff and how to contact them.
Submit an Event
Have an event to submit for consideration?
Human Resources
Want to join our team? Find out how!
[]