Biography
Araminta Harriet Ross was an African-American abolitionist, humanitarian, and Union spy during the American Civil War. Born into slavery, Tubman escaped and became the most known “Conductor” of the Underground Railroad. Struck in the head as an adolescent by a two-pound weight, Tubman never fully recovered, developing epilepsy.

The exact date of Harriet’s (born as Araminta “Minty” Ross) birth is unknown, but most likely occurred between 1820 and 1825 in Dorchester County, Maryland to enslaved parents. 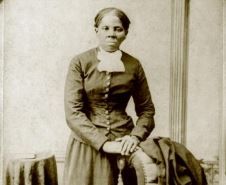 Her early life was full of hardships as physical violence was a part of daily life. The most severe injury occurred when Tubman was sent to the store for supplies as an adolescent, and she encountered a slave who had left the fields without permission. Refusing to restrain the runaway, the overseer threw a two-pound weight that struck her in the head which left her with epileptic seizures, severe headaches and narcoleptic episodes for the rest of her life.

Although Harriet’s father was freed from slavery in 1840 at the age of 45, the rest of the family remained in slavery. When Harriet reached adulthood, around half of the African-American people in Maryland were free, and in 1844 she had a short-lived marriage to a free black man named John Tubman. Following the death of her owner in 1849, Tubman fled to Philadelphia, escaping slavery.

Rather than remaining in the North, Tubman made it her mission to rescue her family and others living in slavery. She made her first trip in 1850 to rescue her family, earning the nickname “Moses” for her leadership. Over time, she was able to guide her parents, several siblings, and about 60 others to freedom. However, the passage of the Fugitive Slave Law in the same year made it possible that escaped slaves could be captured in the North and returned to slavery, making Tubman change her final destination point to Canada which prohibited slavery.

Harriet remained active during the Civil War working for the Union Army as a cook and nurse, later becoming an armed scout and spy. The first woman to lead an armed expedition in the war, she guided the Combahee River Raid, which liberated more than 700 slaves in South Carolina. After the war, Tubman spent her days on her new land in Auburn, New York, which was sold to her by abolitionist Senator William H. Seward in 1859. She later married a Civil War veteran, Nelson Davis in 1869 and they adopted a baby girl named Gertie in 1874.

Despite her fame, she was never financially secure, but it didn’t stop her from donating a parcel of her land which now houses The Harriet Tubman Home for the Aged. The head injuries became more painful as she grew older, and she died of pneumonia in 1913, buried with military honors at Fort Hill Cemetery in Auburn.
Get Started
Learn About Our Services
Find a Provider
View Profiles, Videos,
Maps & More
Recreation
Participate in Activities
for Children & Adults
Report Abuse
Report Incidents of
Abuse & Neglect
Government Websites by CivicPlus®
[]