Biography
Heather Anne Mills is an English charity campaigner and former model, who became famous after losing her leg in a freak traffic accident in the 90s.

Mills was born on January 12, 1968 in Aldershot, Hampshire. At the age of nine, Mills and her siblings were left in the care of her abusive father when her mother left the family. After he was thrown in jail, when Mills was a teenager, she moved to London with her mother, but ran away from home and found herself homeless for a short time. 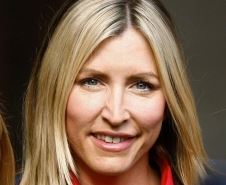 Moving from job to job, Mills found her calling in modeling in the late 1980s. In 1990, she moved to Yugoslavia to take a break from modeling, but returned to it to raise money for war refugees after the start of the war. Back in London, Mills was crossing the street on August 8, 1993, when she was struck by a police motorcycle. She suffered crushed ribs, a punctured lung, and the loss of her left leg below the knee.

Following a second surgery in October of 1993, which further shortened her leg, Mills set up the Heather Mills Health Trust which delivers prosthetic limbs to people, particularly children, who have lost limbs after stepping on landmines. Her prosthetic leg was replaced on a regular basis, due to the size of the amputation changing as it healed. Mills then had the idea to collect thousands of discarded prosthetic limbs for amputees in Croatia. She also persuaded the Brixton prison governor to have inmates dismantle and pack the limbs for transportation. This project resulted in 22,000 amputees obtaining limbs, in addition to fittings of limbs and rehabilitation for citizens who already had prosthetics.

With the help of a ghostwriter, Mills wrote a book about her experience titled Out on a Limb in 1995. All proceeds were given to Adopt-A-Minefield, whose mission is to clear minefields and offer survivors assistance. She is the vice president of the Limbless Association.

Outside of her charity work surrounding prosthetics, Mills is also an avid vegetarian. She’s done promotional work for PETA, and opened her own vegan restaurant called VBites in 2009. Currently, she is a member of the British disabled ski team, looking to be part of the 2014 Soci Paralympics team. Competing in 2012 at the Austria Cup, she won the Gold Medal in the Super G Ski Speed Race, as well as four gold medals at the United States’ Adaptive Alpine Skiing National Championships World Cup.
Get Started
Learn About Our Services
Find a Provider
View Profiles, Videos,
Maps & More
Recreation
Participate in Activities
for Children & Adults
Report Abuse
Report Incidents of
Abuse & Neglect
Government Websites by CivicPlus®
[]