Biography
Heather Leigh Whitestone McCallum was the first deaf Miss America, having lost most of her hearing at the age of 18 months.

Heather was born on February 24, 1973 in Dothan Alabama. At 18 months old, she contracted a dangerously high fever, caused from the Haemophilus influenza virus. Only hours from death, the doctors used two antibiotics to reduce the fever and save her life. Returning home, it became clear that things were not normal. Taken back to the hospital, she was diagnosed as “profoundly deaf” with no hearing in either ear, the result of the virus and the high-dose antibiotics. 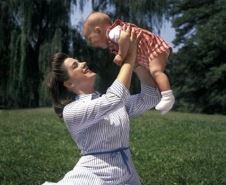 Without an interpreter, she attended public school until she was twelve years old, inspired by another young woman from Alabama, Helen Keller. Falling behind, she was enrolled into the Central Institute for the Deaf in Missouri in 1991. She learned two grade levels per year, and three years later, caught up with her peers. Returning to Alabama, she graduated with a GPA of 3.6. She then went on to study at Jacksonville State University, also continuing to pursue her passion for ballet.

Entering the Miss America pageant circuit, she won Miss Jacksonville State University title and went on to become Miss Alabama her first year. When she stood next to Miss Virginia in the Miss America pageant as one of the final two, she couldn’t hear the host, Regis Philbin announce her name, but read his lips. As Miss America, Heather showcased her S.T.A.R.S. program. It stands for “Success Through Action and Realization of your dreams.” The five points are: positive attitude, belief in a dream, the willingness to work hard, facing obstacles, and building a strong support team – all things Heather had done in her life. During this time she also served as an executive member on the President’s Committee on Employment of People with Disabilities.

Since Miss America, Heather has continued to promote awareness of Deaf issues. She has written four books and is a motivational speaker. She has served on the National Council on Disability, the Helen Keller Foundation for Research and Education, and the National Institute of Health on Deafness and Other Communications Disorders. In 2002, she decided to have a cochlear implant operation in her right ear after not hearing the cries for help from one of her son’s.
Get Started
Learn About Our Services
Find a Provider
View Profiles, Videos,
Maps & More
Recreation
Participate in Activities
for Children & Adults
Report Abuse
Report Incidents of
Abuse & Neglect
Government Websites by CivicPlus®
[]