Biography
Helen Keller was an American author, political activist, and lecturer. She was the first deaf/blind person to earn a Bachelor of Arts degree. Well-traveled and outspoken, Keller is remembered as an advocate for people with disabilities as well as women’s suffrage and labor rights.

Born June 27, 1880 in Tuscumbia, Alabama, Keller was a happy and healthy baby. It wasn’t until she was 19 months old that she contracted an illness, thought to be either scarlet fever or meningitis that left her deaf and blind. 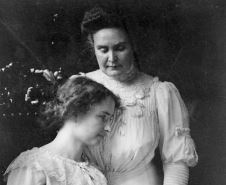 At the time, she was able to communicate somewhat with the cook’s daughter, Martha Washington. In 1886, Helen’s mother was put in contact with Anne Sullivan, a visually impaired 20 year-old, to become Helen’s instructor. Sullivan arrived at the house in March 1887 and immediately began to teach Helen to communicate by spelling words into her hand, beginning with “d-o-l-l.” It wasn’t until the next month that Keller had her breakthrough when Anne poured water over her hand, signing “water” into her other hand.

After Keller’s breakthrough, she attended several schools for the Deaf, before entering Radcliffe College where she obtained her Bachelor of Arts degree. Her want to communicate with others lead her to learning how to speak, and “hearing” people’s speech by reading their lips with her hands. She became proficient at using Braille and reading sign language with her hands.

Keller went on to become a world-famous speaker and author. Among other things she also helped found the Helen Keller International Organization, devoted to research in vision, health, and nutrition, as well as the American Civil Liberties Union. She traveled to over 40 countries with Sullivan, and met every U.S. President from Grover Cleveland to Lyndon B. Johnson. Keller was also friends with many famous figures such as Alexander Graham Bell, Charlie Chaplin, and Mark Twain.

At age 22, Keller published her autobiography The Story of My Life (1903), including words that Keller wrote and the story of her life up to age 21. In 1908 she wrote The World I Live In, giving readers insight into how she felt about the world. Keller even introduced the Akita dog breed to the U.S., after she was gifted two from Japan in 1937 and 1938.

Keller suffered a series of strokes in 1961 and spent the last years of her life at home, dying on June 1, 1968 at her home in Connecticut. One of Keller’s most remembered quotes mentions her impairments saying, “The best and most beautiful things in the world cannot be seen or even touched, they must be felt with the heart.”
Get Started
Learn About Our Services
Find a Provider
View Profiles, Videos,
Maps & More
Recreation
Participate in Activities
for Children & Adults
Report Abuse
Report Incidents of
Abuse & Neglect
Government Websites by CivicPlus®
[]