Biography
Henry Franklin Winkler is most famously known as “The Fonz,” a character he played in the 1970s on Happy Days. Outside of that role, he’s a successful director, producer, and author. The two-time Golden Globe winner has achieved a successful 30-year career as an actor, despite his struggle with dyslexia.

Winkler was born October 30, 1945 in Manhattan, New York City, the son of Jewish emigrants who came to the United States in 1939 on the eve of World War II. Learning disabilities were widely unknown in the 50s and 60s and Winkler took the brunt of the criticism, labeled “stupid” and “lazy” as he struggled with dyslexia which he didn’t discover until he was 31. 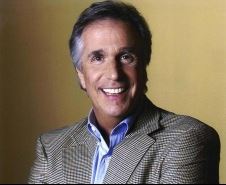 Despite his poor grades, Winkler shined on stage. At the age of fourteen, Winkler decided to become an actor, eventually going to Yale University’s Drama School, earning his Masters in Fine Arts in 1970.

Moving to Los Angeles in 1973, Winkler decided to take a shot at a career in television. Within two weeks he won a part as Valerie Harper’s date on The Mary Tyler Moore Show, followed by a bigger role on The Bob Newhart Show. Homesick after a month, he was packing to move back to New York when he auditioned for Happy Days, in which he landed the role of Arthur “Fonzie” Fonzarelli, debuting on January 15, 1974.

After Happy Days, he formed his own production company, Winkler-Rich Productions, and went on to produce the successful television series Ryan’s Four and MacGyver, as well as directing the film Memories of Me. Winkler returned to acting in the 1990s, starring in four Adam Sandler films, The Waterboy, Little Nicky, Click, and You Don’t Mess with the Zohan. More recently, he has had a recurring role on Arrested Development.

Outside of acting, Winkler has collaborated with a fellow dyslexic, Lin Oliver on a series of children’s books about a 4th grade boy, Hank Zipzer, who is dyslexic. Winkler has published 17 books about his hero Zipzer, the “world’s greatest underachiever.” Living with dyslexia every day, Winkler encourages every child that writes to him about Zipzer, telling them, “This is what I know: A learning challenge doesn’t have to stop you. Your learning challenge will not stop you from meeting your dream. Only you will stop yourself from meeting your dream.”
Stay Connected
Sign up to receive notifications
Directory
A listing of our staff and how to contact them.
Submit an Event
Have an event to submit for consideration?
Human Resources
Want to join our team? Find out how!
[]