Biography
Howard Michael Mandel is a Canadian comedian, actor, television host, and voice actor. He is well known as host of the game show Deal or No Deal, as well as a judge on America’s Got Talent. Mandel has mysophobia (an irrational fear of germs) to the point that he doesn’t shake hands with anyone, as well as Tourette’s syndrome manifested through OCD, which has become well documented by his biography “Here’s the Deal: Don’t Touch Me.” 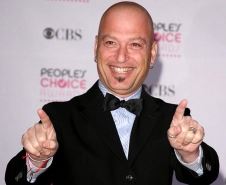 Mandel was born on November 29, 1955 in Toronto, Ontario. He grew up with an unhealthy fear of germs refusing to tie his shoes. Also struggling with ADHD, high school was a difficult time for the comedian who eventually dropped out after being expelled for pulling practical jokes on fellow students.

Leaving school, he became a carpet salesman and starting a stand-up routine. While performing his routine at Yuk Yuk’s in Toronto he eventually got a week-long booking feature act in 1978. On a trip to Los Angeles, Mandel performed a set at The Comedy Store, which resulted in his becoming a regular performer there. He came to national attention in the U.S. during a six-year run on St. Elsewhere in 1982, playing Dr. Wayne Fiscus. During this time he also voiced Gizmo in the 1984 hit Gremlins, and its 1990 sequel Gremlins 2: The New Batch. For the first two seasons of Muppet Babies, he voiced Bunsen Honeydew, Animal and Skeeter. Going beyond acting roles, Mandel was the creator and executive producer of Bobby’s World from 1990 to 1998.

In 2005, Mandel found his biggest success as the game show host for Deal or No Deal. Trademarking his signature fist bump to avoid shaking hands, Mandel finally revealed to the world just how bad his OCD was. Checking door handles 32 times, washing his hands until they were raw, refusing to touch hand rails and public bathrooms to name a few, Mandel used his new found fame to shed light on the stigma of mental health, testifying on Capitol Hill. In 2008, he published an autobiography titled “Here’s the Deal: Don’t Touch Me” which shines light, but also pokes fun at his irrational fears.

Currently, Mandel is a judge on America’s Got Talent, which has showed his fear of germs a number of times from various acts. However, none of this has stopped him from bringing better awareness to these issues to help people around the world.
Get Started
Learn About Our Services
Find a Provider
View Profiles, Videos,
Maps & More
Recreation
Participate in Activities
for Children & Adults
Report Abuse
Report Incidents of
Abuse & Neglect
Government Websites by CivicPlus®
[]