Biography
James Grover Thurber was an American author and cartoonist, known for his drawings in The New Yorker. One of the most popular humorists of his time, Thurber lost an eye to a wayward arrow that then caused him to go almost entirely blind as a child.

Thurber was born on December 8, 1894 in Columbus Ohio. Growing up with a father who was a sporadically employed clerk, and minor politician, and a mother who was known as a practical joker, Thurber used his family life throughout his work. While playing a game of William Tell with his two brothers one day at the age of seven, Thurber was shot in the right eye with an arrow. He lost the eye, and would later become almost entirely blind. Unable to participate in sports and activities because of this injury, he began drawing. 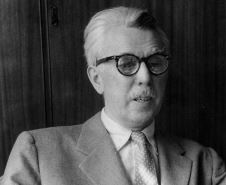 From 1913 to 1918, Thurber attended The Ohio State University, but never graduated because his eyesight prevented him from taking a mandatory ROTC course. Moving to Washington D.C. in 1918, Thurber worked as a code clerk for the Department of State from 1918 to 1920. During this time he also moved to Paris, France to work at the U.S. Embassy. After this, he returned to Columbus, where he began his writing career as a reporter for the Columbus Dispatch from 1921 to 1924.

Leaving Columbus for New York City in 1925, Thurber took a job as a reporter for the New York Evening Post, before joining the staff of The New Yorker in 1927 working alongside his friend, E.B. White. The friendship would turn out to greatly benefit Thurber in the business world, as it was White that found some of his cartoons in a trash can. White submitted them for publication in 1930. Thurber contributed his writings and drawings to The New Yorker until the 1950s.

Thurber died on November 2, 1961 at the age of 66, due to complications from pneumonia. In his honor, an annual award called the Thurber Prize, began in 1997, to honor outstanding examples of American humor. His houses in Ohio and Connecticut are listed on the U.S. National Register of Historic Places. He wrote 26 books and over 25 short stories in his life.
Get Started
Learn About Our Services
Find a Provider
View Profiles, Videos,
Maps & More
Recreation
Participate in Activities
for Children & Adults
Report Abuse
Report Incidents of
Abuse & Neglect
Government Websites by CivicPlus®
[]