Biography
James William Durbin is an American singer and guitarist who finished fourth place on the tenth season of American Idol. Charming audiences, he let the world in on his life battling Tourette’s and Asperger’s syndrome.

Born January 6, 1989, in Santa Cruz, California, Durbin was diagnosed with Tourette’s and Asperger’s syndrome shortly after his father’s death when he was nine. Bullied for having big ears, and making faces and noises he couldn’t control, Durbin was challenged at a young age. 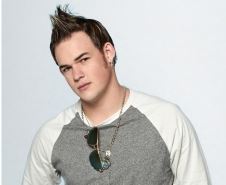 When he was twelve, he was given a hand-me-down guitar and a chord book. Studying the basic songs, he realized no matter what kind of day he had at school, he could come home and create his own world within the music. He attended Musicschool, a special music school, instead of a traditional school, but never graduated. Going into theater for a short time, Durbin performed in a Santa Cruz children’s theater group called Kids on Broadway in 2006 landing the lead roles in Grease, and Beauty and the Beast, while landing the lead roles in 2007 in West Side Story, and Sweet Charity performing for All About Theater.  During this time he also acquired his GED.

Durbin first auditioned for American Idol in Season 8 but was not chosen, before becoming successful two years later in Season 10 at the age of 21. Performing with bands like Judas Priest, Durbin made it to the Top 4 before being eliminated. After his elimination, he appeared on several talk shows as well as the American Idol Tour. Dedicated to bringing awareness to Tourette’s, Durbin appeared in a documentary, Different Is The New Normal, that focused on a teen’s effort to overcome Tourette’s syndrome. Later that year, Durbin released his first album titled Memories of a Beautiful Disaster.

His struggles could have gotten to Durbin, but he refuses to be defined by them. In an interview during his Idol time, he said, “I have Tourette’s and Asperger’s, but Tourette’s and Asperger’s don’t have me. I’m doing what I can to suppress it. It’s not who I am.” Today, he encourages children living with these conditions to keep dreaming and keep pursuing their goals, despite their challenges. Sharing his own story of personal struggles, he shows others to believe in themselves, while also delivering the message of anti-bullying.
Get Started
Learn About Our Services
Find a Provider
View Profiles, Videos,
Maps & More
Recreation
Participate in Activities
for Children & Adults
Report Abuse
Report Incidents of
Abuse & Neglect
Government Websites by CivicPlus®
[]