Biography
James Douglas Muir Leno, is an American stand-up comedian television host. Most famous for his Tonight Show, Leno struggled in school with dyslexia, but used it as the motivation to pursue his comedy career.

Jay was born on April 28, 1950 in New Rochelle, New York. He struggled in school with poor grades due to his dyslexia, his guidance counselors at one point in high school recommended that he drop out. 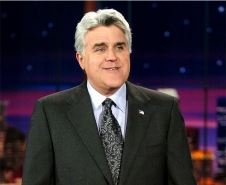 Leno ignored the idea though, graduating and applying for the prestigious Emerson College in Boston. His initial application was denied, but Leno persevered, spending his weekdays camped out in front of the admissions office. Emerson finally recognized his perseverance, and accepted him. Leno graduated with a Bachelor’s degree in speech therapy to further prove his doubters wrong.

Starting his own comedy club while at Emerson in 1973, he began working the club circuit in Boston and in New York, performing over 300 events annually. Leno also appeared in minor roles in several television series and films, most prominently in American Hot Wax and Silver Bears in 1978. Moving to late-night television, starting in 1987, Leno was a regular substitute host for Johnny Carson on The Tonight Show, in which he later replaced him in 1992. After a bumpy start, the show took off and still leads the rating charts today. Leno left in 2009 briefly, before returning to the show in 2010 after a very public war with Conan O’Brien.

Speaking about his dyslexia, Jay credits it to getting him to where he is today, “One thing about mildly dyslexic people – they’re good at setting everything else aside to pursue one goal.” In his spare time, Leno remodels cars, a hobby that he started at a young age. His first remodel was at the age of fourteen where he fixed-up a 1934 Ford V-8 truck. He now owns approximately 190 vehicles. Since 1985, Leno has been the grand marshal for the Love Ride – a motorcycle charity event which has raised nearly $14 million dollars for charities benefiting muscular dystrophy research, Autism Speaks, and in 2001, the September 11 attacks recovery.
Stay Connected
Sign up to receive notifications
Directory
A listing of our staff and how to contact them.
Submit an Event
Have an event to submit for consideration?
Human Resources
Want to join our team? Find out how!
[]