Biography
Jean-Dominque Bauby was a well-known French journalist, author and editor of the French fashion magazine ELLE. Suffering a massive stroke in 1995, Jean-Do went into a coma for 20 days. After coming out of the coma, it was discovered he had a very rare neurological disorder called Locked-in syndrome. Although his mental state was functioning properly, his body was paralyzed from head to toe.

Despite only being able to move his left eyelid, he wrote the book The Diving Bell and the Butterfly by blinking when the correct letter was reached by his nurse slowly reciting the alphabet over and over again. 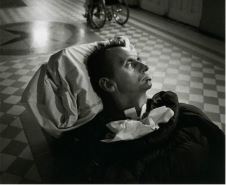 Bauby composed and edited the book entirely in his head, and dictated it one letter at a time, one blink for “yes”, two blinks for “no.” He would spend most of the night editing his thoughts and composing sentences, which he memorized so he could dictate them the next morning. The diving bell of his title is his corporeal trap, the butterfly his imagination. “There is so much to do. You can wander off in space or in time, set out for Terra del Fuego or for King Midas’ court,” he told reporters.

The book, just over 100 pages, was published in France on March 6, 1997. Just two days later, Bauby unexpectedly died of pneumonia. Although his life was short, he wrote in his book, “I am alive, I can think, and no one has the right to deny me these two realities.”

Bauby’s determination to overcome the difficulties led him to create ALIS (Association du Locked-In Syndrome) saying, “I have decided to carry on my fight against fatality by setting up the first association in the world for people suffering from Locked-In Syndrome.” He became its first president, stating the objectives as, “To collect all the present information about the syndrome, to allow sufferers to communicate better with one another, to create means of breaking the solitude and isolation, and to make them true citizens of the 21st century.” His book was later turned into a film in 2007 which won awards at various ceremonies including the Cannes Film Festival, Golden Globes, BAFTAs and Cesar Awards.
Get Started
Learn About Our Services
Find a Provider
View Profiles, Videos,
Maps & More
Recreation
Participate in Activities
for Children & Adults
Report Abuse
Report Incidents of
Abuse & Neglect
Government Websites by CivicPlus®
[]