Biography
Jessica Cox is the world’s first licensed armless pilot as well as the first armless black-belt in the American Taekwondo Association. Born without arms due to a rare birth defect, she uses her feet to drive a car, pump gas, type, play piano, and insert and remove her contact lenses.

Born February 2, 1983 in Sierra Vista, Arizona, Jessica was born with a rare congenital condition that was undetected on any prenatal tests. 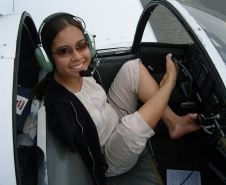 Perfectly healthy despite having arms, Jessica used prosthetics until she was fourteen, giving them up the first day of eighth grade. Vowing never to go to school with prosthetics again, Jessica prepared herself for the questions and stares, but says she felt freer with them gone. Learning to do everything with her feet as a child, she holds an unrestricted driver’s license, and is an active swimmer.

Restricted as a child on the playground, Jessica would daydream on the swings of being Superwoman. After a speaking engagement in 2005, a member of a non-profit group approached her, asking if she’d like to fly an airplane. Deciding to try it, Jessica became instantly hooked and worked for three years on getting her pilot’s license. Although the average time is six months, Jessica needed three years, four planes built without rudder pedals, three certified flight instructors and 89 hours of flight training in three different states, to achieve her dream which she did on October 10, 2008.

Outside of flying, Jessica is also the first armless black-belt in taekwondo. Enrolled in gymnastics, dancing, swimming, and taekwondo as a child, Jessica continued her studies in the martial arts to further her self-confidence. She earned her first black belt when was in the seventh grade and now holds a second degree black belt.

Graduating from the University of Arizona with a degree in psychology, Jessica is a motivational speaker, and has spoken in eighteen different countries. Also a certified SCUBA diver, Jessica loves her role as a motivator saying, “I want people to think, “Hey, if she can do so much without arms, then I can do so much more with my life.”

Today, Jessica is married to taekwondo instructor, Patrick Chamberlain. Involved in several charities including the International Children Assistance Network, where she has become the role model of other girls who were born with no arms. She is the head of her own company, Jessica Cox Motivational Services, and has taken her message to many people around the world including the Pope.
Stay Connected
Sign up to receive notifications
Directory
A listing of our staff and how to contact them.
Submit an Event
Have an event to submit for consideration?
Human Resources
Want to join our team? Find out how!
[]