Biography
John Cougar Mellencamp is an American rock singer-songwriter, musician, painter, and occasional actor. He has sold over 40 million albums worldwide and has amassed 22 Top 40 hits in the United States. He also holds the record for the most tracks by a solo artist to hit number-one on the Hot Mainstream Rock Tracks chart, with seven. His life, however, could have been completely different had it not been for a life-altering surgery at birth to correct his Spina Bifida. 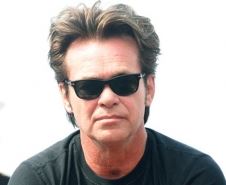 John Mellencamp was born October 7, 1951 in Seymour, Indiana. At birth, it was found that John had Spina Bifida, which was corrected by surgery at six weeks old. He formed his first band, Crepe Soul, at the age of fourteen and later played in other local bands. After graduating in 1974 at a community college, Mellencamp moved to New York City to pursue a career in music. It took 18 months, but Mellencamp finally found someone interested in his music. His first album, Chestnut Street Incident, was released in 1976 but failed to sell, and he was compared to as a lesser version of Bruce Springsteen.

Mellencamp didn’t give up though, releasing his third album, John Cougar in 1979 with his first hit, “I Need a Lover.” His next album, Nothing Matters and What If I Did, in 1980 also had two successful singles. However, it was in 1982 that Mellencamp had his breakthrough with American Fool. “Jack and Diane” reached the top of the pop chart, and his next two albums also saw success.

As his musical career took off, Mellencamp began working with Willie Nelson and Neil Young to organize the first Farm aid concert in 1985, working on behalf of the charity ever since. In 1987, Mellencamp lent his voice to A Very Special Christmas compilation album, benefiting the Special Olympics, a charity he feels close to after his near miss with paralysis. Expanding past the music field, Mellencamp starred as a country music singer in the drama film Falling from Grace in 1992, which he also directed.

Recently, Mellencamp was inducted into the Rock and Roll Hall of Fame in 2008 as his 20th album, Life, Death, Love and Freedom was released to stellar reviews.
Get Started
Learn About Our Services
Find a Provider
View Profiles, Videos,
Maps & More
Recreation
Participate in Activities
for Children & Adults
Report Abuse
Report Incidents of
Abuse & Neglect
Government Websites by CivicPlus®
[]