Biography
John Milton was an English poet best known for his epic poem Paradise Lost that he wrote after going blind in his early thirties.

Milton was born on Bread Street, London on December 9, 1608. His father was a composer, the prosperity of which, allowed him to attend Christ’s College in Cambridge from 1625 to 1629, graduating with his Bachelor’s degree. Preparing to become an Anglican priest, Milton stayed to obtain his Master of Arts degree in July of 1632. 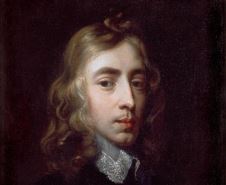 Upon graduating, Milton returned to his father’s house in Hammersmith, where he began his writing. In 1638, after the death of a close friend, Milton penned Lycidas, which is now regarded as one of the greatest poems in the English language. He then left England for a fifteen-month tour of Europe where he spent most of his time in Italy. During this time he met Galileo who was under house arrest for heresy. Returning home, he faced the death of another close friend and Britain on the verge of a civil war.

The religious war took its toll on the country, during which Milton began writing a series of anti-Catholic tracts in 1641 and 1642. By 1649, Milton, who was now firmly anti-monarchy was appointed Secretary of Foreign Tongues to the Council of State, translating documents and writing defenses of the Commonwealth.

Milton’s sight, which had been deteriorating since 1644, failed him completely by the end of 1651 due to glaucoma; he was 43. Despite these misfortunes, he persevered with his secretarial duties until 1659. During the mid-1650s, Milton began work on his biblical story of The Fallen Man and the temptation of Adam and Eve called Paradise Lost. It was composed orally by dictation to a scribe for over a decade, and was published in 1667 with over 10,000 lines. While writing the poem, in 1660, Charles II assumed the throne which meant Milton was in danger after his anti-monarchist stance. Escaping execution, he was arrested and held in custody for several months. This part of his life was later captured in Book VII. Despite his unfortunate political reputation, the twelve-parts epic was instantly recognized as a work of outstanding merit. During his last years, Paradise Lost was revised for the second edition in 1674 and the sequel Paradise Regained was  published in 1671. It dealt with the temptation of Christ in four parts.

Milton died at the age of 65 on November 9, 1674. Words like dreary, self-esteem, padlock, sublime, or flowery that are used commonly today, are all thanks to Milton who first used them in his works.
Stay Connected
Sign up to receive notifications
Directory
A listing of our staff and how to contact them.
Submit an Event
Have an event to submit for consideration?
Human Resources
Want to join our team? Find out how!
[]