Biography
Joseph Pulitzer was a Hungarian-American newspaper publisher of the St. Louis Post Dispatch and the New York World. Pulitzer introduced the techniques of “new journalism” to the newspapers he acquired in the 1880s. Best known for the Pulitzer Prizes, he served in the Union Army during the American Civil War as well as serving as a U.S. Congressman for the State of New York.

Born on April 10, 1847 in Mako, Hungary, Pulitzer emigrated to the United States in 1864, joining the First New York Lincoln Cavalry where he served for eight months. Although he spoke three languages; German, Hungarian, and French, he learned little English until after the civil war because his regiment was composed mostly of German immigrants. 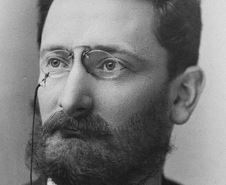 After the war, Pulitzer returned to New York City with little money, selling his one possession for 75 cents and traveling by freight car to St. Louis, Missouri. Spending his free time at the St. Louis Mercantile Library, he studied English and law while working odd jobs. Writing an account of a fraud he was subjected to, Pulitzer had his first piece published in the Westliche Post, where he was later offered a reporter job in 1868. Four years later in 1872, Pulitzer was offered a controlling interest in the paper, and in 1878, he became the owner of the St. Louis Post-Dispatch. The paper thrived with his investigative articles and editorials on government corruption.

Working 16 hour days, Pulitzer soon suffered the consequences of his lifestyle. Although his eyesight was progressively getting worse, he decided to purchase The New York World in 1883, as it was nearing bankruptcy. In one of the most successful promotions, The World raised public subscriptions for the building of a pedestal at the entrance to the New York harbor so the Statue of Liberty, which was stranded in France, could be shipped. Over the next decade, circulations reached more than 600,000, becoming the largest circulating newspaper in the world. During this time he was also elected to the U.S. House of Representatives for New York’s 9th District. However, his health continued to decline as he became virtually blind at age 43 in 1890. Although he never stepped foot inside the newsroom again, he continued to run the newspapers with a code book which contained around 20,000 names and terms.

Pulitzer died on October 29, 1911. One year after his death, the Columbia School of Journalism was founded and the first Pulitzer Prizes were awarded in 1917, to recognize achievements in literature, poetry, history, music, and drama.
Get Started
Learn About Our Services
Find a Provider
View Profiles, Videos,
Maps & More
Recreation
Participate in Activities
for Children & Adults
Report Abuse
Report Incidents of
Abuse & Neglect
Government Websites by CivicPlus®
[]