Biography
Josh Blue is an American comedian who was voted the Last Comic Standing on NBC’s reality show during its fourth season in 2006. Blue’s self-deprecating humor comes mostly from his experiences in life with cerebral palsy.

Blue was born November 2, 1978 in Cameroon where his father was teaching at a mission. He grew up in Saint Paul, Minnesota and graduated high school in 1997. He then went on to start his career as a comedian while seeking a creative writing degree at The Evergreen State College. 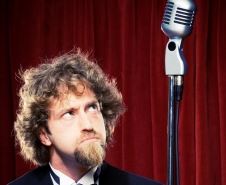 Audiences reacted enthusiastically to his self-deprecating humor at open mic sets, Blue did while in college. In 2002, he won the prestigious Comedy Works New Talent Search contest and appeared several times on Comedy Central’s Mind of Mencia. Then in 2004 he won $10,000 for finishing in first place at Las Vegas’ Comedy Festival’s Royal Flush Comedy Competition. He was the first comedian to do stand-up on The Ellen DeGeneres Show as well as appearing on Live with Regis and Kelly, and Comics Unleashed.

Outside of comedy, Blue is an avid soccer player, taking part in the 2004 U.S. Paralympic team. He has also created various sculptures and paintings. In 2006, Josh broke down the stereotypes of people with disabilities one laugh at a time with his stand-up routine on NBC’s Last Comic Standing. After winning the competition, Blue went on to appear in a 2009 horror film, Feast 3: The Happy Finish, and was voted 11th best comedian in Comedy Central’s Stand-Up Comedy Showdown in 2011. Blue has said that he does this to “make people aware of the fact that people with disabilities can make an impact…I’d rather go through life laughing than not.”
Stay Connected
Sign up to receive notifications
Directory
A listing of our staff and how to contact them.
Submit an Event
Have an event to submit for consideration?
Human Resources
Want to join our team? Find out how!
[]