Biography
Kevin Michael Connolly is an American photographer who was born without legs. A champion skier and avid skateboarder, Connolly has made a collection of photographs of people’s reactions to him as he traveled the world, and published a best-selling book.

Connolly was born in Helena, Montana in August 1985. Born without legs as a “sporadic birth defect” resulting from bilateral amelia, the doctors tested him to no avail. With no explanation, Connolly’s parents were told that he was a normal, healthy, baby, but with a birth defect that prevented his femurs from growing into his hip sockets. 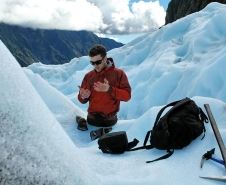 With that information, his parents refused to coddle him. Growing up, he was treated the same as his sisters, and grew up floating rivers and climbing mountains. He was enrolled in gymnastics and wrestling, which gave him the agility and upper body strength to flip himself onto counters and do handstands. By the age of ten, he started skiing with a custom designed monoski. Rarely using a wheelchair, Connolly prefers to travel by skateboard, as he has not used a pair of prosthetic legs since the age of twelve.

Although Connolly lead a normal and carefree childhood, once he grew older, people began to do more than just stare at him. While in college in 2005, Kevin began skateboarding and taking photographs. As he left the safety net of Montana to study abroad in 2006, he began taking pictures of the encounters he endured on a daily basis while living in New Zealand. His first photo came on his return trip home while in Vienna. From a war veteran, to a car accident, medicine his mother took while pregnant, and a shark attack victim, Connolly was asked how he became a man with no legs. It wasn’t until he was in Sarajevo that he almost gave up his project, after witnessing people who had lost their legs or arms during the Balkan conflicts of the early 1990s. As the local community thought he had been a casualty of the conflict, he was handed food, money, and people apologized to him. Caught one day staring at a man who had lost an arm and a leg, Connolly realized that, like the rest of the world, he too stares at people and creates a background for why that person is the way he/she is. Using that information, he completed his trip and published the photos on a website called “The Rolling Exhibition.” Drawing national media attention, appearing on several television talk shows, Connolly was offered a book deal at the age of 23, which he then used to pen his memoir, using his pictures as chapter breaks.

Today, the two-time X-Games medalist is actively involved with several disability non-profit organizations including Make-A-Wish, Eagle Mount, and National Inclusion Project. His desire for adventure has led to his own television show on the Travel Channel called Armed & Ready, where he creates new rigs to travel anywhere, conquer anything, and push the limits of the world around him.
Get Started
Learn About Our Services
Find a Provider
View Profiles, Videos,
Maps & More
Recreation
Participate in Activities
for Children & Adults
Report Abuse
Report Incidents of
Abuse & Neglect
Government Websites by CivicPlus®
[]