Biography
Leonardo da Vinci is responsible for some of the most famous works of art in history, including the Mona Lisa and The Last Supper of Jesus Christ. An Italian Renaissance painter, sculptor, architect, musician, scientist, mathematician, engineer, inventor, anatomist, geologist, cartographer, botanist, and writer, Da Vinci had dyslexia and attention deficit disorder.

Born April 15, 1452 in Vinci (modern-day Italy), da Vinci was educated in the studio of the renowned Florentine painter, Verrocchio. By age twenty in 1472, Leonardo had qualified as a master in the Guild of St. Luke, and his earliest known dated work is a drawing in pen and ink of the Arno valley on August 5, 1473. 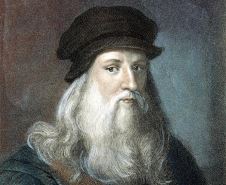 Da Vinci worked in Milan from 1482 to 1499 where he was commissioned to paint the Virgin of the Rocks and The Last Supper. Somewhere between 1503 and 1506, da Vinci painted the Mona Lisa. From 1513 to 1516, he spent much of his time living in the Belvedere in the Vatican in Rome, where Raphael and Michelangelo were both active. After François I of France recaptured Milan in 1515, he was commissioned to make a mechanical lion, which he began in 1516 living in the manor house Clos Lucé near the King’s royal Château d’Amboise. He died there on May 2, 1519 where he is buried.

Although there remains roughly fifteen pieces of artwork, there are 13,000 pages of notes and drawings of da Vinci’s still intact. His writings are mostly in mirror image, a trait shared by many left-handed dyslexic people. His spelling is also considered erratic and strange, a characteristic now known as A.D.D. The notebooks, once loose papers, contain images and concepts well ahead of da Vinci’s time, including the helicopter and hang glider. Journals also included inventions for musical instruments, hydraulic pumps, finned mortar shells, and a steam cannon as well as studying the heart of a fetus and anatomy.

Prominently known for his painting, Leonardo’s two works the Mona Lisa and The Last Supper are the most reproduced piece of art of all time. His drawing of the Vitruvian Man is also regarded as a cultural icon, being reproduced on items such as the euro, textbooks, and T-shirts. Five centuries later, he is still viewed with awe, causing one to write about him, “Leonardo can be considered, quite rightly, to have been the universal genius par excellence.”
Get Started
Learn About Our Services
Find a Provider
View Profiles, Videos,
Maps & More
Recreation
Participate in Activities
for Children & Adults
Report Abuse
Report Incidents of
Abuse & Neglect
Government Websites by CivicPlus®
[]