Biography
Henry Louis Gehrig was a Hall of Fame baseball player for the New York Yankees, leading them to six World Series titles and set the mark for most consecutive games played in fifteen years (2,130, surpassed only by Cal Ripken Jr.) Gehrig set several major league records, including the most career grand slams (23) which was only tied by Alex Rodriguez in 2012. He retired in 1939 after being diagnosed with Amyotrophic lateral sclerosis, passing away in 1941. 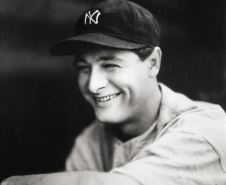 Lou “The Iron Horse” Gehrig was born June 19, 1903 in Yorkville, New York City, New York. He first garnered national attention for his baseball ability while playing in a game at Cubs Park (Wrigley Field) on June 26, 1920. In front of a crowd of more than 10,000 spectators, Gehrig’s New York School of Commerce team was winning 8-6 in the top of the ninth when he hit a grand slam out of the park, at seventeen. Graduating in 1921, Gehrig then studied engineering at Columbia University for two years, playing fullback on the football team and pitcher for the baseball team. On April 18,1923, the same day Yankee Stadium opened and Babe Ruth hit a home run, Gehrig struck out seventeen batters to set a team record. Although the team lost, Yankee scout Paul Krichell was watching, impressed by his left-handed hitting. During the time he observed him, Gehrig had hit some of the longest home runs ever seen, including a 450-foot home run. Within two months, Gehrig had been signed to the Yankees, including a $1,500 signing bonus.

Just two months after signing the contract, in June 1923, Gehrig debuted as a Yankee. By the following season, he was set to replace Wally Pipp at first base. Starting June 1, 1925 as pinch hitter, Gehrig went on to play in the next 2,130 consecutive games. Besides his consistent presence, he and Babe Ruth formed an unbeatable power-hitting duo. During the ten seasons (1925-1934) in which Gehrig and Ruth were both Yankees, they hit a combined 771 home runs. In his years with the Yankees, Gehrig accumulated 1,995 RBIs, while three of the top six RBI seasons in baseball history belong to him. He was also a Triple Crown winner in 1934, leading the American League in batting average, home runs, and RBIs.

Gehrig began having trouble with simple things like tying his shoelaces in 1938, as he turned in his first subpar season, which was still above average with 114 RBIs and 29 home runs. When the Yankees began their 1939 spring training in St. Petersburg, Florida, it was clear Gehrig wasn’t physically okay as he collapsed at AI Lang Field. Still, Gehrig played until May 2nd, when he benched himself after 2,130 games. On July 4, 1939, Gehrig’s number “4” jersey was retired, the first in baseball, during a ceremony where Gehrig delivered his famous line, “Today I consider myself the luckiest man on the face of the earth.” Major League Baseball circumvented its own rules to immediately induct him into the Hall of Fame, at 36, becoming the second youngest player to be honored.

After baseball, Gehrig took the position of New York City Parole Commissioner on January 2, 1940, resigning one month before his death. He died on June 2, 1941, and his wife, Eleanor dedicated the remainder of her life to support ALS research.
Get Started
Learn About Our Services
Find a Provider
View Profiles, Videos,
Maps & More
Recreation
Participate in Activities
for Children & Adults
Report Abuse
Report Incidents of
Abuse & Neglect
Government Websites by CivicPlus®
[]