Biography
Louis Braille was the inventor of braille, a system of reading and writing used by people who are blind or visually impaired. As a small child, Braille was blinded in an accident, but continued his studies, going on to create a form of communication that transformed the lives of millions. After two centuries, the braille system remains an invaluable tool of learning and communication for the blind, and it has been adapted for languages around the world. 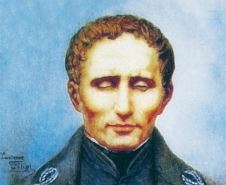 Braille was born in Coupvray France on January 4, 1809. At the age of three, Louis was playing in his father’s workshop, trying to make holes in a piece of leather with an awl, which struck him in one eye. Although it was looked at by a highly-respected surgeon in Paris, there was nothing to save the damaged eye, which became infected, spreading to the other eye. Surviving the infection, Louis was completely blind by the age of five, but learned how to navigate with canes his father made for him.

Although he was blind, Braille was highly intelligent, and studied in the village until he was ten. At that point, he was permitted to attend one of the first schools for blind children, the National Institute for Blind Youth in Paris. While at school, Braille learned the Haüy system, which consisted of embossing heavy paper with raised imprints of Latin letters. The books were heavy, delicate, and extremely expensive, however they did provide one breakthrough – the recognition of the sense of touch as a workable strategy for sightless reading.

Determined to create a new system of reading and writing that could bridge the gap in communications, Louis said, “We do not need pity, nor do we need to be reminded we are vulnerable. We must be treated as equals – and communication is the way this can be brought about.” The origins of braille began in 1821 after Captain Charles Barbier of the French Army devised a system of “night writing,” consisting of dots and dashes impressed into thick paper. Soldiers could share information on the battlefield without having light or needing to speak. Barbier’s code was too complex to use in the original military form but it inspired Braille to develop a system of his own. Working tirelessly on his ideas, it was mostly completed in 1824 when he was just fifteen. He published his system in 1829 and discarded the dashes in his second edition in 1837.

During this time Louis also became an accomplished cellist and organist, allowing him to play for churches all over France. After finishing his own schooling, the Institute kept him as a professor, where he taught history, geometry, and algebra for most of his life. A persistent respiratory illness, thought to be tuberculosis, stayed with him throughout life, causing him to leave the Institute at the age of forty. He died in 1852, two days after turning forty-three.
Get Started
Learn About Our Services
Find a Provider
View Profiles, Videos,
Maps & More
Recreation
Participate in Activities
for Children & Adults
Report Abuse
Report Incidents of
Abuse & Neglect
Government Websites by CivicPlus®
[]