Biography
Ludwig van Beethoven is widely considered the greatest composer of all time, widening the scope of sonata, symphony, concerto, and quartet, while combining vocals and instruments in a new way. Remarkably, some of his most important works were composed during the last 10 years of his life, during which time he had lost his hearing.

Born around December 16, 1770 in Bonn, then part of the Holy Roman Empire, Beethoven was taught by his father Johann, at an early age. 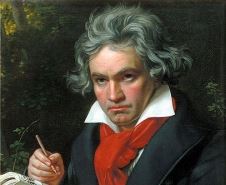 During his first 22 years in Bonn, Beethoven studied with Wolfgang Amadeus Mozart and befriended Joseph Haydn. He moved to Vienna in 1792 where he remained for the rest of his life, studying with Haydn, quickly gaining a reputation as a virtuoso pianist. Starting in 1796, at the age of 26, Beethoven’s hearing began to deteriorate, and was totally gone by 1814.

During his “middle” or “heroic” period of 1803-1812, he composed; an opera, six symphonies, four solo concerti, five string quartets, six string sonatas, seven piano sonatas, five sets of piano variations, four overtures, four trios, two sextets and seventy-two songs. The most famous among these were symphonies No. 3-8, the “Moonlight Sonata”, the “Kreutzer” violin sonata and Fidelio, his only opera. All were composed as his hearing went away. During these years, after performing his Ninth Symphony, better known as “Ode to Joy,” he had to be turned around to see the applause of the audience; hearing nothing, he wept.

As a result of Beethoven’s hearing loss, his conversation books were highly coveted, as they were used primarily in the last ten years of his life. His friends wrote in the books so he could know what they were saying, and he then responded either orally or in the book. One of his most famous quotes shows his will to do his absolute best in life as he writes, “Then let us all do what is right, strive with all our might toward the unattainable, develop as fully as we can the gifts God has given us, and never stop learning.” Beethoven died on March 26, 1827 at the age of 56 from liver failure.
Get Started
Learn About Our Services
Find a Provider
View Profiles, Videos,
Maps & More
Recreation
Participate in Activities
for Children & Adults
Report Abuse
Report Incidents of
Abuse & Neglect
Government Websites by CivicPlus®
[]