Biography
Marlee Beth Matlin is an American actress. She is the youngest, and only deaf performer to win the Academy Award for Best Actress, which she won for Children of a Lesser God in 1986.

Matlin was born on August 24, 1965 in Morton Grove Illinois. At 18 months, she lost all her hearing in her right ear and 80 percent of the hearing in her left ear, making her legally deaf. Later, she wrote in her autobiography that it may have been due to a genetically malformed cochlea. Instead of being sent to a special school, Matlin’s parents decided to educate her in their community, and she began to learn sign language at the age of five. 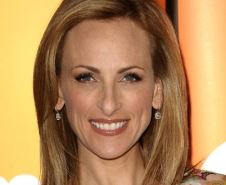 As a child, Matlin discovered acting through a program at the Center on Deafness that brought deaf and hearing kids together. She landed her first leading role as Dorothy in a production of The Wizard of Oz in Chicago. Matlin continued to pursue her acting into adulthood, while also earning a degree in law enforcement at Harper College.

After graduating college, Matlin worked in the Chicago theater scene for several years before getting her big break as the lead in a production of Children of a Lesser God. When the play was adapted into a movie, she reprised her role, starring as Sarah, a young deaf woman who chooses to communicate through sign language alone. At 20 years of age, starring in her first film role, Matlin became a household name when she won the Academy Award for her portrayal in 1986.

Moving to television, Matlin was the star of the series Reasonable Doubts, playing an assistant district attorney alongside Mark Harmon. In 1993, she showed her comedic abilities with a guest appearance as Jerry Seinfeld’s lip-reading romantic interest on Seinfeld. That same year, she landed a recurring role on Picket Fences. She received Emmy Award nominations for her work on both series. She received further Emmy nominations for her roles on The Practice in 2000, and Law & Order: Special Victims Unit in 2004.

Branching out into a new direction, Matlin proceeded to write three books for young adults, Deaf Child Crossing, Nobody’s Perfect, and Leading Ladies. Returning to television in 2008, Matlin showed off another side of herself, joining the cast of season six Dancing with the Stars. In 2009, she published her autobiography, I’ll Scream Later, and lent her voice to the animated television show The Family Guy. Outside of work, she serves on the board of Very Special Arts and Starlight Children’s Foundation. She also is an honorary board member for Easter Seals.
Stay Connected
Sign up to receive notifications
Directory
A listing of our staff and how to contact them.
Submit an Event
Have an event to submit for consideration?
Human Resources
Want to join our team? Find out how!
[]