Biography
Michael Oher is an American football player who was famously portrayed in the Oscar winning film The Blind Side in 2009. Oher earned unanimous All-American honors in college, after overcoming a learning disability that hampered his early education.

Born on May 28, 1986 in Memphis, Tennessee, Oher was one of twelve children born to a troubled mother and a father who was frequently in jail. 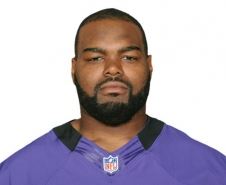 Due to his upbringing, he received little attention. He repeated both first and second grades and attended eleven different schools during his first nine years as a student. He was placed in foster care at age seven, and alternated between living in various foster homes and periods of homelessness.

While staying with a local mechanic, Tony Henderson, Michael was encouraged to enroll at Briarcrest Christian School, to play basketball. Although the school initially didn’t accept him for his .06 GPA, it did finally accept him after he participated in a home school program to get his grades up. After the school realized Michael had no home in November of 2002, he stayed with different families of the school, which initially lead to staying with the Tuohy family early in 2003.

Joining the football team in the 2003 season, he was named Division II (2A) Lineman of the Year, and First Team Tennessee All-State. Oher was a five-star recruit and the No. 5 offensive lineman prospect in the country. In 2004, Leigh Anne and Sean Tuohy welcomed Oher to live with them permanently, eventually adopting him. Hiring a tutor to help, Oher and the family worked at least twenty hours a week after school and various sports practices to improve his grades.

Excelling in track and basketball as well, Oher earned two letters in those sports. He earned All-State honors by helping lead the basketball team to a 27-6 record, winning the district championship his senior year, as well as a state runner-up in the discus.

Oher eventually increased his GPA to a 2.52 by enrolling in several 10-day-long internet-based courses from Bringham Young University. Replacing the Ds and Fs he earned earlier in school classes with As, Oher was able to attend a Division 1 school. As a top recruit, Oher received full scholarships to most SEC schools, accepting the offer from Ole Miss, where he played for four years. Successful off the field, Oher made the dean’s list. He graduated in 2009 as a first-team All-American.

Entering the 2009 NFL draft, Oher was chosen as the 23rd pick in the first round as a right-tackle for the Baltimore Ravens. That same year, the movie The Blind Side, became a top-grossing film of the year. In 2012, he co-wrote his biography, “I Beat the Odds” and in 2013, he picked up his first Super Bowl ring with the Ravens.
Get Started
Learn About Our Services
Find a Provider
View Profiles, Videos,
Maps & More
Recreation
Participate in Activities
for Children & Adults
Report Abuse
Report Incidents of
Abuse & Neglect
Government Websites by CivicPlus®
[]