Biography
American swimmer, Michael Phelps is the most decorated Olympian of all time with a total of 22 medals, 18 of which are gold (an all-time record). In winning eight gold medals at the 2008 Beijing Games, Phelps took the record for most first-place finishes at any single Olympic Games. Diagnosed with ADHD at nine, Michael found his refuge in the pool, becoming the greatest Olympian of all time. 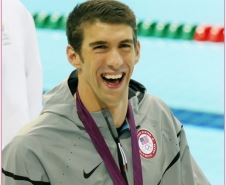 Born on June 30, 1985 in Towson, Maryland, Phelps was the youngest of three children. He began swimming at the age of seven, partly because of the influence of his sisters, and partly to give him an outlet for his energy. At first, Phelps was “a little scared” to put his head under water, so his instructors allowed him to float around on his back – thus the backstroke was his first stroke he mastered. In the sixth grade, Phelps was diagnosed with ADHD. By the next year, he held a national record for his age group. As he racked up more national records, Phelps became the youngest male to make a U.S. Olympic swim team in 68 years at 15 when he made the 2000 Sydney Games. Although he didn’t win a medal, he did make the finals of the 200m butterfly, coming in fifth.

Phelps became a superstar at the 2004 Athens Games winning eight medals, including six gold. His first gold medal was in the 400m IM where he shaved off .15 seconds of his previous world record mark. After the Olympics, Phelps moved with his coach to the University of Michigan where he studied sports marketing and management. Continuing to dominate the pool, Phelps won seventeen medals from 2005-2007 at the World Championships, going seven for seven in 2007.

The hype ahead of the 2008 Beijing Games was felt around the world as Phelps won all eight races, all but the 100m butterfly a new world record. During the games, Phelps said, “Dream as big as you can dream, and anything is possible.” Deciding to return one last time in 2012, Phelps increased his total to 22 medals, setting a new record, beating Larisa Latynina’s prior record of 18 medals.

Now retired, Phelps set a total of 39 world records, more than any other swimmer. Seven records still stand. In 2008, Phelps set up the Michael Phelps Foundation to help promote healthier lifestyles for children with a focus on swimming.
Get Started
Learn About Our Services
Find a Provider
View Profiles, Videos,
Maps & More
Recreation
Participate in Activities
for Children & Adults
Report Abuse
Report Incidents of
Abuse & Neglect
Government Websites by CivicPlus®
[]