Biography
Neil Young is a Canadian singer-songwriter. His career has spanned over 45 years with 35 albums, but beyond singing, Young is an outspoken advocate for disability services. He helped found The Bridge School to help children with severe verbal and physical disabilities as he has two sons with cerebral palsy and a daughter that, like him, has epilepsy.

Neil Percival Young was born in Toronto, Ontario on November 12, 1945. His family moved to Omemee, Ontario that year, where he was diagnosed with type 1 diabetes as a child. 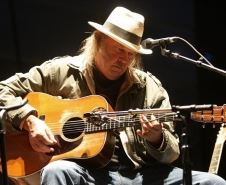 In 1951 he contracted polio in the last major outbreak in Ontario. Following his recovery, the family relocated to Toronto, which is where Neil got his first taste in music. Idolizing Elvis Presley, during his junior high years, he developed his characteristic melodic guitar style and use of the “whammy bar.” Young eventually dropped out of high school to continue his music career.

By the mid-1960s, Young moved to the United States where he formed a band called Buffalo Springfield. Although the group only lasted two years, it released three albums, for which it was inducted into the Rock and Roll Hall of Fame in 1997. Going solo, Young joined former Springfield member, Stephen Stills, along with David Crosby and Graham Nash to form Crosby, Stills, Nash and Young in 1969. The group was invited to perform at the famous Woodstock festival, then being referred to as the “American Beatles.” Going solo once more, backed by the band Crazy Horse, Young released several albums, including Harvest in 1972 which contains the song “Heart of Gold” his only No. 1 song of his career.

Outside of music, Young is involved in disability services, as the 1980s were spent taking care of his two sons, Zeke and Ben who suffer from cerebral palsy. Realizing that he could connect with Ben through their mutual love of trains, Young developed special controllers for his train set to allow Ben to control the switching and power. This formed the basis for a company called Liontech, which bought the Lionel company in 1995 as it was facing bankruptcy. He still sits on the board of directors and is named co-inventor of seven US Patents.

His youngest child, Amber Jean, was born with epilepsy, which he too began struggling with in his twenties. Because of this, Neil and his then-wife Pegi, founded a center for children with communication disabilities in 1980 called the Bridge School in San Francisco, in which he spends most of his time today. Holding a yearly concert starting in 1986, it has attracted thousands of concertgoers and featured many major artists like; Tom Petty, The Who, Foo Fighters, Paul McCartney, and Metallica.
Get Started
Learn About Our Services
Find a Provider
View Profiles, Videos,
Maps & More
Recreation
Participate in Activities
for Children & Adults
Report Abuse
Report Incidents of
Abuse & Neglect
Government Websites by CivicPlus®
[]