Biography
Nelson Aldrich Rockefeller was an American businessman, philanthropist, and politician. He served as the 41st Vice President of the United States from 1974-1977, serving under President Gerald Ford. He was also the 49th Governor of New York. Never one to let a problem get him down, Rockefeller dealt with the daily struggles of dyslexia.

Born on July 8, 1908 in Bar Harbor, Maine, Rockefeller was the grandson to Standard Oil founder, John D. Rockefeller Sr. Although his childhood was easy, his dyslexia became a problem in the third grade when he sunk to the bottom of his class. 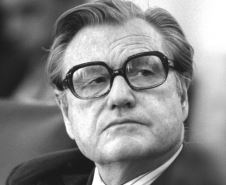 With no teachers or tutors because dyslexia had yet to be a distinguishable disability, Rockefeller struggled with reading. Math was easier, as he understood the concepts, but he would frequently reverse numbers because of his dyslexia. After almost failing the ninth grade, he decided he needed to concentrate and exercise self-discipline.

During WW2, Rockefeller developed his lifelong interest in Latin America, becoming fluent in Spanish. Becoming friends with President Roosevelt, he was appointed the Assistant Secretary of State for American Republic Affairs in 1944, and later served as a member of the U.S. delegation at the United Nations. It was the first meeting of the UN, and Rockefeller was instrumental in persuading it to establish its headquarters in New York City. Returning to private life for a short time, Rockefeller would later receive presidential appointments by Harry S. Truman, Dwight D. Eisenhower, and Richard Nixon.

In 1958, Rockefeller became the 49th Governor of New York, where he would hold the post for fourteen years. Unsuccessfully attempting to win the Republican bid for President several times, Rockefeller settled for the Vice Presidential role in 1973 serving under President Gerald Ford. After Ford won the Presidency, Rockefeller conducted a special PBS program called “The Puzzle Children” to lend his voice to the dyslexic children in America. In the address, he told the world of his personal discoveries of how to cope with dyslexia, saying, “Accept the fact that you have a problem. Refuse to feel sorry for yourself. You have a challenge; never quit!” He hoped telling the world that he could speak three languages and give speeches on television, and won his place as Vice President would give hope to others.