Biography
Nicholas James Vujicic is a Seriban-Australian evangelist and motivational speaker born with tetra-amelia syndrome, a rare disorder characterized by the absence of all four limbs.

Vujicic was born on December 4, 1982 in Melbourne, Australia limbless. Missing both arms at shoulder level, as well as both legs, Nick was left with a small foot with two toes where his legs were located. Otherwise, he was healthy. Originally prohibited by law from attending a mainstream school because of his physical disability, Vujicic became one of the first disabled students integrated into a mainstream school. Bullied for being limbless, Vujicic struggled at a young age, eventually realizing that his accomplishments could inspire others. 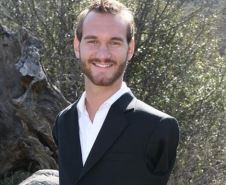 Beginning to master the daily tasks of life, Vujicic learned to write using the two toes on his left foot with a special grip that slid onto his big toe. He learned to use a computer and type using the “heel and toe” method. He learned to throw tennis balls, play drum pedals, get a glass of water, comb his hair, brush his teeth, answer the phone, and shave. In Year 7 of his school, he was elected captain of MacGregor State School in Queensland and worked to raise money for local charities. At the age of seventeen, he started giving talks to his prayer group and eventually started his non-profit organization, Life Without Limbs.

Attending Griffith University, he graduated with a double major in accounting and financial planning at the age of twenty-one. Subsequently, he became a motivational speaker, traveling internationally and focusing on teen issues. Today, he’s addressed over five million people in over 44 countries on five continents. In 2007, Vujicic moved from Australia to California where he is the President and CEO of his non-profit organization. His first book, Life Without Limbs: Inspiration for a Ridiculously Good Life, was published in 2010. Nick married his fiancée in February of 2012, and will soon become a first-time father. He currently runs another program called Attitude is Altitude, as well as promoting his second and third books, Unstoppable and Limitless. Sharing his message, he says, “Dream big my friends and never give up…For every disability you have, you are blessed with more than enough abilities to overcome your challenges.”
Get Started
Learn About Our Services
Find a Provider
View Profiles, Videos,
Maps & More
Recreation
Participate in Activities
for Children & Adults
Report Abuse
Report Incidents of
Abuse & Neglect
Government Websites by CivicPlus®
[]