Biography
Lynn Nolan Ryan is a former Major League Baseball pitcher. Currently the owner, president and CEO of the Texas Rangers, Ryan spent 27 years as a pitcher for four different teams. Dynamite on the pitcher’s mound, Ryan has dyslexia which he has struggled with his entire life off the field.

Born on January 31, 1947 in Refugio, Texas, Ryan developed his pitcher’s arm at an early age – throwing objects at any target. His father, Lynn, thought that baseball was a better use of his arm, buying him his first baseball glove and encouraging Nolan to play the game at the age of seven. 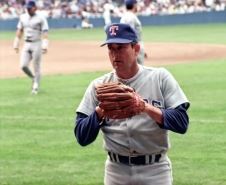 He joined his local Little League team soon after, and became the baseball star during his high school career. Where he excelled in athletics, Ryan was not as lucky in academics. Averaging Cs with a few D’s and F’s, Ryan was unable to read properly, and his dyslexia went undiagnosed until he was an adult. None of this stopped him however, from impressing the New York Mets Scout who watched him intimidate pitchers with his hard pitching and wild balls that often hit the batters.

After graduating high school in 1965, Ryan was drafted by the Mets in the 12th round of the 1965 MLB Draft. When he took his spot on the team the following year, he was the second-youngest player in the league. Reaching the World Series in 1969, Ryan gave the Mets a 2-1 lead in the Series by saving Game 3. The Mets won the Series in five games and it would be his only appearance at the World Series in his career.

Traded to the California Angels in 1971, Ryan had a league-leading 329 strikeouts in his first season; within five seasons, that number would only be his fourth-highest strikeout total. In 1973, he set his first major record by striking out 383 batters in one season. He also hit two no-hitters that year, striking out 17 batters in the second game against the Detroit Tigers, which was another record. Ryan added two more no-hitters in 1974 and 1975.

After eight seasons with the Angels, Ryan became a free agent and was signed to the Houston Astros in 1980. In his first season, he recorded his 3,000th career strikeout. In 1981, he threw his fifth no-hitter, breaking another record. After leaving the Astros, Ryan joined the Texas Rangers in 1989 where he recorded his 5,000th strikeout that year. During his time with the Rangers, he recorded his sixth and seventh no-hitters – extending his record. Already planning on retiring after the 1993 season, Ryan tore a ligament two games ahead of the plan, ending his career.

Post-retirement, Ryan was hired by the Texas Rangers as president in 2008. He then went on to buy and become the CEO of the team. Ryan is the only major league player to have his number retired by three different teams. He was elected into the Hall of Fame the first year he was eligible in 1999. Among his accomplishments are these top rankings: all-time strikeout record (5,714), fewest hits allowed per nine innings (6.56), and no-hitters (7). He also has the distinction of playing during seven Presidential administrations.
Get Started
Learn About Our Services
Find a Provider
View Profiles, Videos,
Maps & More
Recreation
Participate in Activities
for Children & Adults
Report Abuse
Report Incidents of
Abuse & Neglect
Government Websites by CivicPlus®
[]