Biography
Patrick Henry Hughes is an American multi-instrumental musician who was born without eyes and unable to fully straighten his arms or legs, making him unable to walk. Born on March 10, 1988 in Louisville, Kentucky, he was diagnosed with bilateral anophthalmia, pterygium syndrome and congenital bilateral hip dysplasia.

Despite these circumstances, Patrick overcame these physical issues to excel as a musician, student, performer and public speaker. 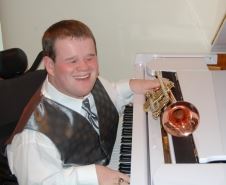 His father introduced him to the piano at nine months old, hitting a high note, a low note, and a middle note. To his astonishment, Patrick Henry felt the keys and played a high note, a low note, and a middle note. His father then struck one key four times, which Patrick Henry also mimicked. Not only could Patrick Henry hear different pitches and understand them, but he could count. By two, Patrick Henry could play songs after hearing them once, and began taking requests. Once in school, he began playing several instruments including the trumpet, as well as singing. At age nine he had his first significant public appearance when he performed with country music singer Bryan White on a local television station’s fund-raising telethon.

In high school, Patrick Henry joined the band playing trumpet, and sang in the choir. Fluent in Spanish, he had the opportunity of visiting Spain while also studying classical music on the piano, and blues music. An “A” student, he easily gained admission to the University of Louisville, studying Spanish as his major. Joining the band, the director told him to suit up for the marching band, as he would play the music while his father pushed him on the field. The duo were instant hits, featured on ABC’s “Good Morning America,” ESPN, Sports Illustrated magazine, Oprah, Ellen, and People magazine. In 2006, Patrick Henry was the winner of the Disney Wide World of Sports Spirit Award, an honor usually given to a college athlete. In 2007, the family was featured on “Extreme Makeover – Home Edition.”

Although he is confined to a wheelchair, Patrick Henry hasn’t let that stop him from seeing the world. He’s performed in Asia, Canada, South America, and Europe, as well as around the country, including two performances at the Grand Ole Opry and at the Kennedy Center. His first book, I Am Potential, was published in 2008 where he writes on the first page “When life gives you lemons, accept them and be grateful.” He’s also released two CDs. All of this, accomplished before graduating college in 2010, magna cum laude.
Get Started
Learn About Our Services
Find a Provider
View Profiles, Videos,
Maps & More
Recreation
Participate in Activities
for Children & Adults
Report Abuse
Report Incidents of
Abuse & Neglect
Government Websites by CivicPlus®
[]