Biography
Ray Charles Robinson was a pioneer in the genre of soul music during the 1950s. Fusing rhythm and blues, gospel, and blues styles into his early recordings, he also helped racially integrate country and pop music during the 1960s. Charles became one of the first Black musicians to be given artistic control by a record company, while Frank Sinatra called him “the only true genius in show business.” All of this success came after Charles became blind at the age of seven. 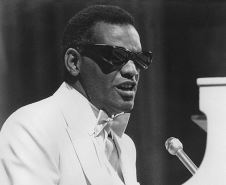 Charles was born on September 23, 1930 in Albany, Georgia. Moving to Greenville, Florida as an infant, Charles began to lose his sight at the age of five, and was completely blind by the age of seven due to glaucoma. He attended the Florida School for the Deaf and the Blind from 1937 to 1945, where he developed his musical talent. During this time, both his mother and father died. While in school he became the premier musician, playing at assemblies on Fridays, and creating “RC Robinson and the Shop Boys” while singing his own arrangements. Charles lived with two families while attending school and worked in one of the family’s store at the register, while also sitting in with the Florida A&M University student band.

Moving to Jacksonville after his parents’ deaths, he played the piano for bands earning $4 a night. Later moving to Tampa, Charles played with a band called The Florida Playboys, where he began his habit of wearing sunglasses. Wanting his own band, he moved to Seattle in 1947 and started recording. His first single “Confession Blues” in 1949 soared to No. 2 on the R&B charts. He released two more Top Ten hits in 1951 and 1952 with “Baby, Let Me Hold Your Hand” and “Kissa Me Baby.” Charles received his first No. 1 hit with “I Got a Woman” in 1955. Choosing not to renegotiate his contract with Atlantic, Charles brokered a lucrative deal with ABC Records, which is where he recorded “Georgia on My Mind” in 1960, which won him his first Grammy Award. He followed that with another Grammy Award for “Hit the Road Jack” in 1961.

Charles hit hard times in the 1970s with the rise of psychedelic rock, but he did record the hit version of “America the Beautiful” in 1972, while “Georgia on My Mind” became the state song of Georgia in 1974. He left ABC Records to sign a contract with Columbia Records in 1983 where he recorded a string of country albums before recording pop songs with Warner Bros. Records. He performed at two presidential inaugurations for Ronald Reagan and Bill Clinton, and appeared on several 80s and 90s sitcoms.

He died on June 10, 2004 from liver failure at the age of 73. Two months after his death, his final album, Genius Loves Company was released with duets from popular singers like B.B. King, Van Morrison, Willie Nelson, Gladys Knight, Elton John and more. It won eight Grammy Awards, giving him a total of 20 Grammys. He was later played by Jamie Foxx in the movie Ray, which won two Oscars.
Get Started
Learn About Our Services
Find a Provider
View Profiles, Videos,
Maps & More
Recreation
Participate in Activities
for Children & Adults
Report Abuse
Report Incidents of
Abuse & Neglect
Government Websites by CivicPlus®
[]