Richard Branson
Sir Richard Charles Nicholas Branson is an English business magnate, best known as the founder and chairman of Virgin Group of more than 400 companies. Despite dropping out of school at the age of fifteen due to poor grades from his ADHD and dyslexia, Branson started creating businesses at age fifteen, before becoming the fourth richest citizen of the United Kingdom.

Born on July 18, 1950 in London, England, Branson struggled with dyslexia and ADHD as a child, dropping out of school at the age of fifteen to start a youth-culture magazine called Student. The publication sold $8,000 worth of advertising in its first edition which was launched in 1966. Branson was therefore able to run the first 50,000 copies for free. 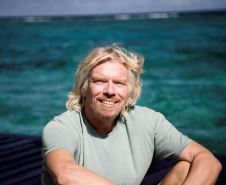 By 1969, Branson was living in the heart of London. During this time, he had the idea to start a mail-order record company called Virgin to help fund his magazine efforts. The company performed modestly, but it made enough that Branson was able to expand his business venture, adding a record shop. The shop was a major success, and Branson was able to build a recording studio in 1972 in Oxfordshire, England.

Mike Oldfield was the first artist on the label, recording his single “Tubular Bells” in 1973 that stayed in the UK charts for 247 weeks. Using the momentum of Oldfield’s success, Branson signed other aspiring musical groups including the Sex Pistols, the Rolling Stones, and Genesis. These acts helped make Virgin Music one of the top six record companies in the world.

Not content to stay in music alone, Branson branched out into travel and airline with the Voyager Group in 1980 and Virgin Atlantic in 1984. Although Virgin fell on hard times in the 90s, eventually being sold for $1 billion, Branson vowed to continue on. Today, Branson’s Virgin Group holds more than 200 companies in over 30 countries including the U.K., the U.S., Australia, Canada, Asia, Europe, and South Africa. These businesses include; a train company, luxury game preserve, mobile phones, and space tourism.

Outside of business, Branson broke the record for crossing the Atlantic in 1986, and was the first person to cross the Atlantic by hot-air balloon in 1987, followed by the Pacific in 1991. He was knighted in 1999 for his contribution to entrepreneurship and has an estimated net worth of over $4 billion. Discussing how dyslexia changed his life and how he dealt with hardships in his life, Branson has said “Do not be embarrassed by your failures, learn from them and start again.”
Get Started
Learn About Our Services
Find a Provider
View Profiles, Videos,
Maps & More
Recreation
Participate in Activities
for Children & Adults
Report Abuse
Report Incidents of
Abuse & Neglect
Government Websites by CivicPlus®
[]